I loved his last album, but I didn’t feel this one besides Heartache Medication and Ain’t Always The Cowboy. Better than a fair amount of country albums but I’m not getting the whole thing.

no nickname needed to express - 😩

The radio is still playing “Night Shift” in February 2020. Like almost everyday. Honestly haven’t heard any of these songs on the country stations here in Dallas, Texas. And I bought the physical copy at Wal-Mart for 3.99 . On discount - Personally liked the album - but then I saw that Tyler Childers had a New CD out - so that’s what I’m listening to- and yeah -Childers, his songs get played on the radio.

Bought it on vinyl and it’s sounds amazing. So many good instruments tied in with amazing and very relatable vocals.

RWTrojan08 - Country music the way it should be

Another amazing album from Mr. Pardi. There’s not a single track I don’t like on the album, it’s all gold. He’s my country artist by far.

I saw Jon Pardi before a Miranda Lambert concert and loved his music and his energy! This release is just wonderful. So many fun songs and ballads. Not one bad song on it!

One of my favorite purchased albums

The instruments have more feeling than his voice.

New music that is country. So refreshing!

This is probably one of the best albums to come out of Nashville in a long time. It has ACTUAL country songs with good lyrics, with steel and fiddle playing. Hopefully this starts a trend back to old-school country in the mainstream. My favorites are “Old Hat” and “Call Me Country”. 5 out of 5, for sure. P.S. Those hating this album, calling it “rap”, need to get their ears checked.

When today’s country seems to have a lot of pop in it. It’s nice to see someone is keeping the country in their music. Thank you, Steve

Sounds the way that country music is supposed to sound like.

IS COUNTRY, BY GOD.

GREAT Album. Every song is solid. Well done Jon, thanks for putting in the effort to make such a quality album. Too bad a lot of other radio-played piers can't pull this off like you do.

This just topped Cody Johnson atop my personal list for the year.

Thank you for keeping soul in music. Cant take anymore manufactured beats in country. Country always seems to lean pop then snap back to its roots.

Kansaskingairpilot - Not even close to California Sunrise.

Let me preface this review this review with this: I am a HUGE fan of Jon Pardi. Ive seen him several times live, and I believe he is the most talented singer/songwriter to come out of Nashville in the last 30 years. That being said, this album fell well short of expectations, when compared to California Sunrise. The three songs that are Pardi-worthy are the title track “Heartache Medication”, and then followed closely by “Starlight”. Both songs are the strong (especially StarLight), well constructed song feel that we are used to Jon putting out. “Tied One On” is another fun song that will get the dance floor moving. It couples a strong hook and great lyrics, with a strong melodic structure. It’s even funny in some places. But the album goes off the rails after that...... “Me and Jack” is a gimmicky type tune that doesn’t really stand up. You hear it once, and after that its just kinda “Meh...” “Old Hat”- This one feels like a popcorn Nashville throw away tune that will only resonate with simpleton trump supporters. The lyrics are almost as awkward as the HORRIBLE intro and melody. It’s basically, the song form of a Cracker Barrel restaurant. This one should have been chucked in the trash. “Tequila Little Time” - Any time you are thinking about using a horn section in a country song.... DON’T. Another example of what seems like rushed song writing, and sloppy melodic development. Apparently it was written at a songwriting getaway, but like a lot of tunes on this album, it suffers from lack of song development. It’s a “ditty”, not a Jon Pardi caliber song. “Nobody Leaves a Girl Like That”- This one stumbles in the first verse, bad. It finally picks up steam in the chorus, but once again, its just not the caliber of song that Jon Pardi is capable of creating. “Ain’t Aways the Cowboy”- This song has some great lyrics in places, but in others, its just cliche, and awkward. The intro is especially awkward. Once again, it’s short of what Pardi is capable of. “Love Her Like She’s Leaving” - When this song started, I thought it was the theme for a 1980’s sitcom. The intro melody is that bad. I’m not saying it gave me cancer, but close... This one will be featured in a made for TV movie on the Hallmark Channel As stated above, I believe Jon Pardi is insanely talented. This album feels rushed, and sloppy. Get off the road for a while Jon. Get in the studio and do your magic. Forget what the label tells you.I didn’t know it was possible to make an album as good as California Sunrise. It was INCREDIBLE!! But I hate to say it, Heartache Medication is no comparison.

This album has a few great singles in it that are a great listen. Country music has needed something like this for a while.

Thankful to hear an artist stay true to their original sound

Amazing album!! He brings it 💯!

Thank You Jon for bringing country music back into my generation of music.

Here we go again! More overproduced formula audio from Nashville. Every producer wants to be Phil Spector. ..except maybe for the murder part...but whoever produced this murdered it. Did I miss the part where there was a rule that every cut had to be a wall of super-compressed sound with the vocal pushed down into the mix? There are a couple of good songs on the album but the production and agrrngement (what arrangement?) mostly destroyed them. Also, not sure the Lauren Alaina/ Jon duet worked. Not a good fit.

??Not sure what you want here - Jon Pardi

This is the best, full and complete country album and what made country, country. Well done to Jon Pardi!

The best singer in country music is back with another awesome album! ❤️

Call Me Country is a beauty of a song. This album is great.

If I could give it 10 stars! Just love everything JP does and he does not disappoint with this one. It’s so so good! I’m getting my fill of country twang, slide guitars, and country cowboy truth! JP should be proud of this album! It’s awesome. Thank you!!

In the words of the great Eric Church “We need a country music Jesus To come and save us all.” Jon Pardi could be our guy.

This is a great album. He brings back 90’s county sound into today’s arena. Just when you thought pop country took over, in came artists like Jon Pardi! I will definitely be picking up a hard copy of this album!!

IOnlyReviewBadMusic - Everything I thought it would be

I’ve been waiting months for this to drop, and was not disappointed. It’s nostalgic, in that it reminds of the country I used to listen to when I was younger. Hail Jon Pardi for keeping country alive.

please start to read and study books and poetry?? This is just awful. Everything about it. Everyone go pat yourselves on the back now.You made another crappy record.

What an amazing Country Artist!!! Every single is fire!

Way to go Jon. Thank you for keeping true country music alive. This album is an unbelievable work of art, already listening on repeat. I highly highly recommend buying this. As a die hard fan I couldn’t be happier.

Love hearing country music that sounds like it should, with no bro-country beats and no click tracks. Thanks for delivering an album that I’m already playing start to finish! This album and Midland’s new album gave me my country music back. 👍

This is TRUE COUNTRY! Every song is a home run!

I pre-ordered this as soon as it was available a month ago. Now none of the songs will play. I want my money back

_morgmorg - JON PARDI DID IT AGAIN

Can’t wait to see him play in Houston! He has the best performance I’ve seen in a long time!

If you've listened to Jon Pardi, it should come as no surprise that Heartache Medication is a modern country masterpiece. Whether he's being rowdy or sentimental, Pardi delivers the goods, backed by outstanding, authentic musicianship. The rest of y'all can listen to your new-age pop-country with programmed drum loops, but I'll be right here listening to Jon Pardi because this is what country music SHOULD sound like.

Jon Pardi is like if Cash, Waylon, & Hank Jr had a baby 🙌🏼 Thank you for keeping country, country!

Pardi's back! More great music with actual country instrumentation and feel, with a power that only orginates from traditional values and actual substance. Buy this album immediately.

PeterPriscilla - Jon Pardi is the next coming of George Strait💯

JP puts out great song after song....stays true to his music and country music. Best album of 2019. Outstanding!! Flys under the radar - but JP is one of the best!

“Old Hat” is gonna be an anthem song for so many of us that value yesterday. This album comes out just as I finished watching Ken Burns documentary “Country Music”. Jon Pardi’s lyrics & music embodies much of what was talked about during this series. I saw Jon Pardi back in January, in Edmonton, Alberta, Canada. After seeing his performance, it prompted me to spontaneously fly to Vegas to see another country great, George Strait. I can say without hesitation Jon Pardi is the best Country artist today. I wish him many more albums & success. “Don’t get above your raisin”.

One of the only country artist I can still listen to

Jakobclark - Jon Pardi Does It Again

Love hearing this compared to most pop country these days!

What do you think Heartache Medication album? Can you share your thoughts and listen experiences with other peoples?

Heartache Medication is the third studio album by American neotraditional country artist Jon Pardi. The album was released on September 27, 2019, via Capitol Nashville. Following the success of 2016's California Sunrise, Pardi reteamed with co-producer Bart Butler and brought in Ryan Gore to work on new material for his next country album, carrying traditional content that evoked sad emotions but gave the listener good vibes at the same time. Heartache Medication debuted at numbers two and 11 on the Top Country Albums and Billboard 200 charts, respectively. It has spawned two singles: the title track (his third number-one country hit) and "Ain't Always the Cowboy".. 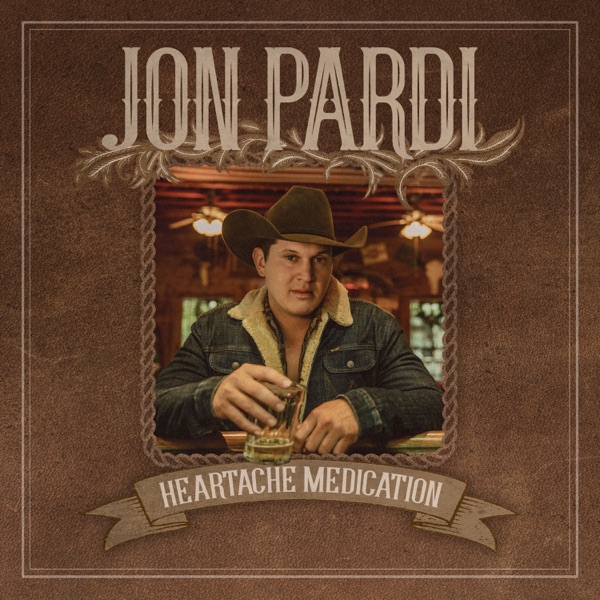