This song is whats up, and my boy drake in it. For all yall haters, if yall dont like Waka then dont listen to him and stop hating!

ovoisaac - Only here for drake

i hate waka flOcka BuT this song is da best

This guy is awesome, i love this song

Of course! I'm not a fan of this kind of music to listen to on a regular basis. This is only something you ride to for fun when you're clowning around with your closest, die hard buddies. It would have been better without Drake, he's so overrated like the rest of these rappers.

People like Waka for his Energy. This songs lacks it, but it's meant to be a radio single.

I love the song! I heard it in the club and I was like, "Flocka did it again!" adding Drake was a great addition. Can't wait to hear the remixes that people will do.

Ignore all the haters they don't know what a good song is.$$YMCMB$$

Drop it to the floor

Been looking for this song, thanks!

It's a great combination with Drake, GOOD JOB!!

On the October's very own blog for free. Very old . But it still a pretty good song

Tapking362175 - Round of applause for my boy Drizzy

Another watered down, simple sounding song from an extraordinarily mediocre rapper...

I can't believe music that come to this. This is complete and utter S#!T..

I really loved his "no hands"... but even in this song my FAVORITE ARTIST EVER (Drake) doesn't even sound as good. And as far as talent (for waka)... it's there, but I am not seeing as much as I would like.

2 of the worst rappers ever

i think, no i know that i could write a better rap than waka flocka flame, i mean look at his name too. love drake ONLY WHEN HES NOT SINGING but here its not enough to make up for how terrible waka flocka is. Rap is being destroyed by people like waka flocka, gucci mane, t-pain, mac miller and kid cudi, all of who have no right to release a song. T.I. and eminem, only ones who don't rap about b***hes and weed. keep looking for t.i., album comin out soon.

Drake made the song rns!!

I believe drake would work with him. Its beyond me why people support and listen to this garbage. Go listen to j cole and then tell me waka is a good rapper! #ColeWorld

waka flocka is one of the worst rapper ever,I dont get why people like listening to him if u wanna hear good rappers that are alive try listening to Eminem,T.I.,Lupe Fiasco,Kanye West,etc.cause they're way better than this piece of trash waka flocka

Cole.J - Who ever made this beat should get an award!

Lyrics aren't that good but it just makes you wanna jump out of ya seat and bust a move !!!

Drake goes hard and waka is actually alright. I like it

Waka it follows he's name whack.... I don't get it how is he consider a rapper

usually dont like waka but this is a hit

I like this song because it is slower and waka isn't yelling and screaming all through the song... Great Job.

I actually like Waka Flocka the more I listen to him. Hes not a mainstream rapper but is on mainstream radio channels and theres something about him that is like a glorified hype man that is actually good. Hence why he has artists on almost every track. Still very good though.

I LOVE U FLOCKA BUT U CAN DO BETTER

I am very aware that their are rappers with better lyrical talent however you cant help but like him he always has good beats yeah his songs are inapropiate but hes not meant to be taken serious hes songs are made to just dance and chill too. Yes his songs can be rather stupid when No Hands first came out i was like what was this garbage but after I really took the time to listen to it I loved it his songs they pump me up every time and thats what I like about him Im no fan of soulja boy or gucci I think they are just plain stupid but something about waka is likeable its like you know his songs are dumb but their like guilty pleasures u always want to come back for more.

Lil b is wayyyyyyyyyy trashier

Flocka hs a certain style of music. If you do not like it, dont listen to it. Simple as that.

My lil brother got me liking Waka Flocka about a year ago and for good reason! He may not be an awesome rapper, but his hooks are catchy and his beats are great. Good record overall.

drake is the only reason i give this song any stars

Strizzle Bangs with the 15s

Why does Drake have to do crappy songs like this? He did great in the song but Waka can just go away. I want a edited version without Waka.

i love the version w/o drake on it a lot more. but i love this song. would give it a 5 star if it was original version.

Drake & Waka Flocka Flame Go Hard. And also this was included on drake's album called The Road To Take Care. Like This Please.

Waka is crazy! Drake is on fire! Bow!

Waka Flocka Flame is back on another single.

DJ SOUTHSIDE - Not the worst

Lyrics are not that great but the energy and beat is good.

Waka Flocka Flame has never been a good rapper, and he's still pretty bad...although this is the best song iv'e ever heard by him and drake is an outstanding rapper who makes this song even better BUT the lyrics arn't all that good nd the beats pretty basic....3 stars cuz i like Drake.

What do you think Round of Applause (feat. Drake) - Single album? Can you share your thoughts and listen experiences with other peoples? 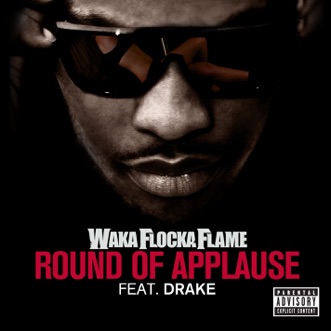