PinkFrosty - Took a while 2 grow on me

Took a while 2 grow on me because of the slow vibe of it, but after a couple of listen it's one of my current favorites:)

I really hate Jamie Foxx never been a fan of his but I love Drake sooooooooo much. I bought this song because of Drake. I really like it very much. I wish he choose some else other then Jamie but I guess I have to deal with it.

See Oceans 22 review. EXACTLY!!!! Have you ever heard that theme music for the Jamie Fox show? Here I go Here I go Here I go... Ya check that out. Thats Jamie not selling out and bringing the funk for those R&B fans who actually have a mortgage.

I know that drake wrote the song and he sang the song and it was a good as it was, but i think that jamie foxx mad it come alive. Jamie foxx is a better singer than drake and the wordplay is crazy and brings out a better jamie. Drakes verse was the icing on the cake. its just a overall great song. whoever says that it was better when it was just drake is the dumbest person on this earth and should not be commenting on songs at all... who ever it is probably things that waka flaka flames is the best rapper alive! lol... this a good look for jamie as singer and drake as a writer/rapper

Sounds like ma boi is making his way back to the front lines!!! Go get em Jay... Been waitin for yo crazy tail to tap on dem keys again!!

Drakes version is better. Now I do like this version but drake did it better

Drake did write it and sing it first and he gave it to jamie foxx... I like both of them but the drake one a lil better. Honestly it's just a super good song either way idk y people r trippin over jamie foxx doing it. it was drake's decision to give it to him...

This song has feeling, however Jamie Foxx's voice doesn't suit this beat. Another version of this song "Same Mistakes" is the exact same song, sung only by Drake however. His melodious voice is better than Jamie's in this case.

Jamie ripped drakes song off. Drake came out with this song mad long ago.

Grown and Sexy trumps the kiddie tunes! The kids prefer Drake but the grownups prefer Jamie's version. Real talk the song really did not catch my attention until Jamie was added! Great job Foxx! Drake sings better than Foxx--LAUGHABLE!! great collabo though

drake why would u give away such a song ?! jamie so killed this song ! drake sings it waaay better & the song just fits his voice . the original was10x better . itunes should get drake's version ! STUPID JAMIE > : \ - still kinda like the song tho , because drake's in it <3

DRAKES version is Wayyy better.. I knw he wrote it for Jamie but still.. This is a mess.

I fell for this song today. Love the old school slow jam sound. R&B needed this. Thank you, Jamie and Drake.

Jamie Foxx sings way better than Drake. I ain't hating on Drakes singing its just that Jamie has better range than Drake. I mean check out Jamie's "Unpredictable" album and you'll see wat I'm talking about. I simply love this song for it's emotion overall put in by these two.

this song really came together with Jamie singing it. Perfect!!

I fall in love over and over to this song! Love it!!!

Drakes version is the best version, it was his song. He had made a full song called "same mistakes" that's drakes full version, Jamie foxx murdered the vocals, because I feel drake carried it so much better. iTunes I know you can do better than this, release both versions of the song. Drakes would sell more hands down.

this song is so cool and flows perfect

DRAKEY , your orginal version is soooooooooo much better .

enimar - Fall for your type

Drakes version is way way waaaay better I mean jamie can sing but this sounds like crap comming from him. I honestly thought and hoped that drake would release this as is own but Jamie? And for all you that say I don't know what I'm saying your obviously a Jamie fan

this is one of jamie foxx's best songs. smooth vocals, a nice beat and excellent lyrics. only the best can write songs like this.

jamie foxx is a good singer and all that but this sond would have been WAYYYYY better with just drake. drake is just more like fit 4 this song

Drake OBVIOUSLY sings better than foxx. this song isnt right for jamie! drake made it a great song with his version. he should of never gave it away.

Kieahle - Lets Clear This Up

Ok this song is AMAZING and these two men came together and put their all into this song. Yes its true this song WAS LEAKED early during the pre-production stages with only Drakes vocals on it THIS IS THE FINISHED PRODUCT A SURE TO BE CHART TOPPER.

I believe this version and Drake's are amazing. Drake may had made the snippet of this song back in feb. for Jamie so I'm not hating, though I agree drake version's is better but who cares its better than nothing.

The song speaks the truth & makes u think.

i love this song, but i like drakes version better

Both of these mean have such soft voices. Jamie being the Tenor and Drake being the baritone. The slow beat sets you in the mood, and the words carry you away into ruminating thoughts. This song is a good song; Jamie's most emotional song ever. This song speaks for those people who are in a "relationship limbo". It says, "I don't know if I should stay for what you have done in the past, but I love you and I want to be with you". It is worth the buy!

A little repetitive, but I can deal wit it

Not As Good As Drake's Version. itunes should get that version

it gives me such a sexy exotic feeling and i can relate for the words....love it Jamie!!! (muah)

I Love This Song. So Bootleg Ariana Down There, Please Stfu (: It's A Great Song, Drake Didn't Even Kill It..

Whoa whoa whoa!! Hold up. What happened to drakes singing?! Wasn't he the one that wrote this song? I think Jamie foxx just ruins this song. His singing is nothin compared to drakes. I think they shud make this song again and this time let drake sing it.

The Song Is Great, Jamie Foxx Is A Good Singer But When I First Heard The Sample Of Drake I Think He Should Of Sang On This Track. Kinda Got Tricked But It's Still Good.

This songs good but not with Jamie foxx, drake made another version of this song called same mistake and it's 100 times better go look it up

My mojo so dope

Slow, nice and well put together

Will Itunes ever put the version where it's mainly Drake singing the song! That one is much better! But either way I love the song!

AMAZING! such a great song! jamie foxx and drake are the best r and b singers out there even though drake is more of a rapper, he stills kills it when he sings hope for more great songs like this one!

I used to strongly dislike this song until I heard it again today. I'm so in love with this song. It's AWESOME!!!!! Definitely a must buy!

What do you think Fall for Your Type (feat. Drake) - Single album? Can you share your thoughts and listen experiences with other peoples? 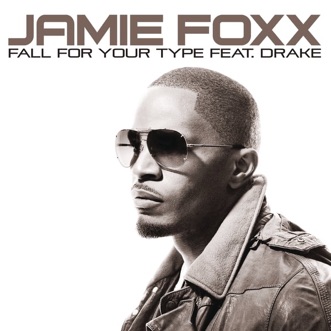