Mr.JayAre - Drake made it happen

Stars are for drake

How does anyone still support these “artists” that put out this trash??? All of that ad libbing sounds like Tourettes.

Drake was fine on his verse, but man that beat switch up into Future was rough...who produced this? Future needs to get a new sound and flow, the same old auto tuned warble from him is getting old

The song was riding before Future came in and changed it up. Can't even understand this dude. Who is his fanbase?

If you don’t like LYRICS then you won’t understand

Best song of 2020 not even trolling

Drake kills it. Should’ve been a Rick Ross or Travis Scott song

Honestly can vibe to it!🔥

Drake definitely makes the song better. You have to bring hella heat when Drake is on your track!

They back ya’ll!! Get ready for some fire baby! Ha!!

Nothing crazy, but both parts are pretty good (I just wish they felt more connected rather than two short songs glued together)

music video straight bit NF’s When I Grow Up.

Good production, tuff lyrics, good switch up that is unique, and if you do not like future why keep clicking on him and talking about him all the time? Every drop he has i see the same type of people giving him the same low-key support. Ya goofies this his track

Very surprising single! Both parts work together and futures flow is great as usual

musiclover938 - It was Aight

This one of futures worse songs, like this and your just a fan girl of drake

Drake’s part was pretty good. But when Future came in it basically ruined the whole vibe of the song.

Drake was good, and I was vibing to the song, and then Future comes in and completely obliterates it in a few seconds. Future seems boring to me. Just the same old thing, material things and whatnot, except he’s just boring. He even sounds bored when he’s rapping. There’s nothing special about him, he’s just another slow rapper obsessed with material things and money and stuff.

Drake verse was fire until Future goes in! If it’s true, drake making his next album with Future! I’m not buying! SMH....., Drake needs to leave future in the past.

Rob lee g - This two together are on fire

You got to cop this one

They thought they did something

Future needs to get back on that Lean, straight mumble rapping on his part. Drake had a solid beat, but lazy with the bars. Future needs a ghost writer.

It’s like two songs in one. why do people hate this song

See what happens when you combine these two?

They make dope music together

Future really shines on this one

What a time to be alive

I like the song but wish there was a clean version

Working on the weekend as usual.

BaltimoreRavens1 - The first half was good

It is like listening to two different tracks. Future could have done a lot better on his half.

not feeling this one

#ListenToThis: Life Is Good by Future #NowPlaying on @Napster .

What do you think Life Is Good (feat. Drake) - Single album? Can you share your thoughts and listen experiences with other peoples? 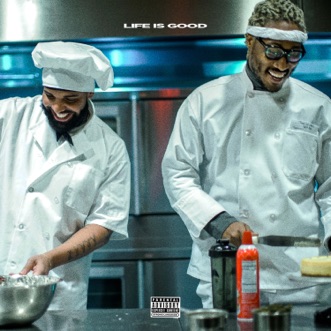