I’ve been a Beatles fan all of my life.. Patel and his voice range as a lone singer is worth hearing!

Pineapples5000 - Don’t listen to the boomers

Drharms - Hits you in the feels!!

I loved this movie! Himesh does a fantastic job of hitting home the historical significance of the Beatles’ music in our lives. I will never listen to the Beatles in the same way. I loved the joy, love & emotion he put into each and every song! I am really going to enjoy this music! Reminds us to not forget the past! Love Himesh Patel, beautiful voice!!

askworldtraveler - This was pure fun

I was at both Hollywood Bowl concerts - with a deeply flawed sound system - even sitting right next to the pool. This album - and movie - took me back to a magical time where the genius and magic of The Beatles resonated throughout the Bowl - it's that good. Relax and enjoy it. It's not perfect, neither were The Beatles -

Loved the movie and soundtrack!

As others have pointed out, this isn’t intended as a stand-alone “cover” album of Beatles songs. Rather, this is very much the soundtrack to the very enjoyable movie, and if you approach this album having seen the film you’ll really enjoy the songs and the visuals from the story of ‘Jack’ and his musical journey. Though not a straightforward cover effort, as a Beatles fan myself I think several of the pieces are actually really good and can indeed stand by themselves as ‘covers.’ If you didn’t see the movie, you missed out on not only a fun movie, but as the credits rolled we got to hear the full “Hey Jude” by the real Beatles coming from those awesome movie theater speakers!

The movie gave so much texture to the brilliance of the Beatles songs that I instantly bought my top 5 from the movie the next day. To have these songs in my current playlist has lifted many a mood this week and at 46 years old because of the movie Yesterday I actually feel personally connected to the melodies and lyrics of the Beatles. By having them in my pocket to play they have become relevant to what’s up in my life. I just “completed my album” because all the songs used in the film keep popping up in my head. I realize this isn’t an album review but more of a “why I bought the album” post so I will say the first 5 songs I bought sound perfect and brighter than all songs anywhere and I feel spiritually lifted and armed for battle with songs Let it Be and ALL YOU NEED IS LOVE. I’ll never forget the All You Need Is Love part in the movie and want to thank the Yesterday team for the way the reintegrated some of the best music of all time into my current playlist which otherwise would not include The Beatles.

I’m looking for an original soundtrack called “One Life” performed by Ed Sheeran in this movie, Yesterday. But it’s not here!

Pleasantly surprised, and will be waiting for the vinyl so I can add it alongside my original Beatles LPs.

This has got to be one of the worst covers of Beatles songs I’ve ever heard. Years back The Smithereens did an excellent job coveting Beatles songs but this is just horrible. How can any true Beatles lover call this good? Whoever the guy is singing is really amateurish like most singers today. I grew up listening to The Beatles and saw them on The Ed Sullivan Show both times in 1964. Wonder what Paul and Ringo think of this cd and the movie? Not much I’m sure.

John Haley 11 - It was great I recommend

It had a familiar theme but it seemed somehow different

Tim W J - Listening to these songs was an emotional experience

I am a huge Beatles fan. Their music has changed my life in many ways. Watching the movie and listening to the soundtrack has been quite an emotional experience for me.

I can’t think of the words to say to explain how utterly amazing the film and album is. Please go see it.

getmadbruhh - Weaker than the movie

I didn't even think that was possible

For the haters on here, I recommend watching the movie...there is a lesson to be learned from it much like listening to the lyrics of a Beatles song. Fresh yet familiar arrangements. Timeless songs. Bought the album just to support one of the greatest bands in rock history in some small shape or form.

JohnnyAYQ - One of my FAVORITE movies!!!

Great arrangements and singing! Fun, heart warming and touching music... “couldn’t image the world without The Beatles in it”

I saw the movie and it made me like this soundtrack even more. Definitely worth a listen. Good movie to!

This does not have ALL the songs from the movie. One Life which Ed Sheeran wrote for the movie should be on here!

Loved the movie, loved the soundtrack. Surprised that Lil Wayne wasn't featured in any of the songs.

The soundtrack takes on lots more meaning after seeing the movie. Love his voice and, of course, the song selection.

Not a Beatles cover album, rather new, though familiar arrangements. Even includes some of the main character’s solo songs before he was “discovered.” I really enjoyed these versions of these timeless classic tracks.

KingCollin989 - Can't wait to see this

I've grown up listening to The Beatles music with my dad. Love the idea for this movie and can't wait to go see it in the theaters.

Hope the movie's better than the soundtrack, because this is lame stuff. If you're going to cover the best band ever, you need to bring something to the table.

Max B. H. - A film with a very interesting synopsis

The arrangements of the Beatles songs sound cool in this soundtrack, even with a version of the Universal logo's fanfare done in that style. Highly recommended for fans of this groundbreaking band that changed rock music forever.

Thanks for being awesome

bryanr0226 - Not bad at all, love this soundtrack!

Love The Beatles. Can't wait for the movie! 💛

Sounds like nothing more than a mimic. Same vocal phrasing, same arrangements as the Beatles. Pointless.

What do you think Yesterday (Original Motion Picture Soundtrack) album? Can you share your thoughts and listen experiences with other peoples? 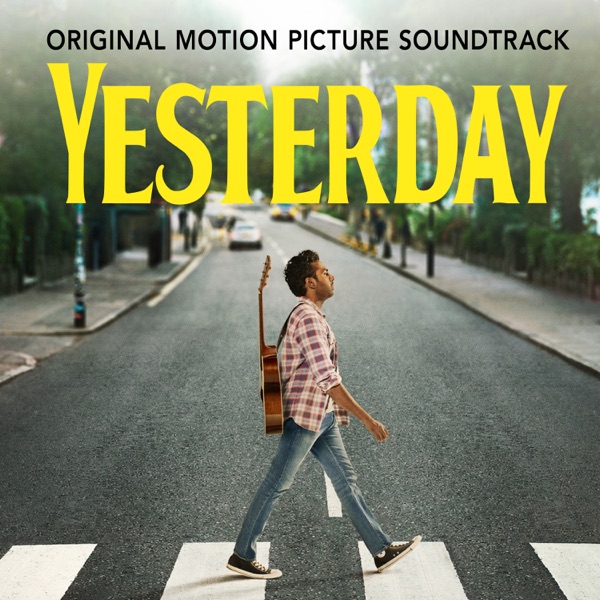