this hit different when you in yo feels

This album wasn’t really what I wanted it to be, but considering it was all freestyled, it’s not that bad, now 72 minutes is a lot, especially for a Emo rap album and was definitely unnecessary, this album has a lot of filler but most of them sound very nice and are really good tracks, the concept on this album is very strong and overall it’s an enjoyable project, but he could’ve done better, i’d still buy it tho, since a handful of tracks are amazing and the rest is either bad or good enough at least

When it first released it didn’t click with me immediately like G&GR but it grew quickly and looking back on it this is possibly the best Juice album. RIP. Best song: Fast

This album is nowhere near better than gbagr but it’s still a very good album. Robbery,out my way,won’t let go are all straight fire 🔥

Baby Pluto Jr. - All of his songs are a vibe

As much as I like gbagr this album hits differently. You can tell the difference between the 2 albums. This is lit and he lived to be a legend

Robbery and Empty Go hard on this Album

Rider is the best song in this album!! Pretty unpopular opinion

why are nik names - Rip juice

He was a good singer/songwriter

Great album listen to it all the time

Bru this ablum is really good, one of his best work. Wish he was here longer, went to all his concerts, they where unreal!.

I’m ready for the unreleased songs

This was one of the best albums of this era

He might not be here but he still doing fantastic. Always remember how much he loved us

omg i have no words its so good!!!

I have been loving juice wrld since I was 5. This was an awesome album. I mostly love robbery

gj,dgd - All songs are strait fire

ya know, Juice WLRD was a goat. there’s no getting around it. i would go so far as to say he’s one of if not the best singer/rapper. his music really touched me and he was gone too soon. rip juice. and yea maybe his music isn’t for everyone but he will always have a place in my mind. rip juice wlrd

Miss my guy juice always a pro and always will R.I.P legend.Will never be forgotten💔🖤🤍🖤😪

While not as good as the first one, this album isn't horrible, and I enjoyed a couple of songs, but as my normal problem is with juice wrld, a couple of songs will sound like there twins of each other, and not all of these songs are bad necessarily, they just feel the same. While the album is not bad I really don't think it's very special, and it kinda felt lazy, but that's just my opinion.

This album shows how versatile and talented he was because of all the different type of beat. Some are alternative beats, some are trap beats, some are R&B beats and some are basic hip hop beats.

Tons of bangers but some songs were just meh

This was juice wrld’s best album and was his peak in the rapping career because there were so many hits such as empty, maze, hear me calling, robbery ,feeling, out my way, bees kneez, and make believe. Juice expressed so much of his life and emotions in this album. Furthermore, he is a unique kind of rapper because he not only raps but also sings, much like trippie red which is why they did a song together called 1400/999 freestyle. Songs that show his melodic skills are “bees kneez”, “ hear me calling”, and “ robbery”. In my opinion this is the best album ever and I highly recommend you listen to this album all the way through. In my opinion, this was the best album of juice WRLD ever.

It reminds me of Goodbye & Good Riddance, almost every songs are really good.

Too many filler songs. Could’ve had 15 and been a banger album but I guess maybe some of those songs are special to him

A great rapper… gone. 😥He will always be remembered. May he Rest In Peace he’s amazing btw like one of my favorite rappers in da world.RESPECT

What a legend this album will never die

Hope you good up there juice.

Juice WRLD is the best

Been in love with almost all of his songs, including these. Hope he’s doing good up there 💞

I love Juice, and this album no doubt has bangers but overall there’s too many songs that bring the album down. 14 tracks would’ve been the way to go, the rest aren’t album worthy imo.

Desire is a masterpiece

Hella 🔥 but there are some filler songs we didn’t need.

bobby ya boi - So good

Really touched me with his music. Helped me through a lot. Sad to see another young rapper gone at such a young age you will be missed Jarad.

We will miss you

Jesus in an album

You will be missed Juice 😞

Juice Is A Damn Legend

Voice, Flow, Style, Lyrics and Rhythm, J.W had it all. Always in our hearts and we thank you for leaving us with your music 💙😔

Amazing work man love your music 🎧 24/7. Songs are so relatable and the beat is lit 🔥

Morglar - Rest easy up there

It is so hard for me to find a song I do not like in any of his albums! Great to listen to

Why is juice wrld so handsome!?! :O lol xD

I love your sound 💕

All the songs are good

If you hate his music idk what is wrong with you! Love every song in this album RIP

Awesome beats, the lyrics are great in my opinion I think it is his best album 🙏✊

Good music that thousands of people can relate to . Great music and great feel to it

His music and energy was great. He will never be forgotten. RIP Juice 🕊

Album is on repeat, love it 🥰🖤

Really good album I recommend it 22 songs for the price

Flangebandit - He sure can rap

We all miss you so much king. Hopefully the true fans will get to see you one day in the sky 🙏🏻. Rest easy legend 👑 999

I wouldn’t call this rap but I still love the music. I find some of the songs are very similar but I love this album.

Can't fault the album, he's as good as the last album and I still can't wait for more!

How is this hip-hop

He has the best and the best lyrics

Death Race For Love was truly an absolute masterpiece.

Can’t stop listening to Juice WRLD’s Death Race For Love, I'm listening it over and over again🤤.

I don't care about you like how no one cares about me, always the same thing, depression and suppression, always in the message, all these lyrics were a message, a message of life and death, and a race for love from a, from above, but i never get it, never got it, i can't help it.

I miss going to shows 😢 what was your fave show that you went to before COVID hit? Mine is Juice Wrld’s death race for love tour at Bill Graham or Zedd’s Orbit Tour at Bill Graham Watching these clips got me in my feelings 😭😭.

At number one of course, after hours... (the rest has no order) pluto x baby pluto , positions , high off life , death race for love , eternal atake chip chrome & the mono tones , anyways , and whole lotta red .

@JuiceWorlddd 's Legends Never Die now has more streams than Death Race For Love on Spotify. Which album do y'all prefer?.

What do you think Death Race for Love album? Can you share your thoughts and listen experiences with other peoples?

Death Race for Love is the second studio album by American rapper Juice Wrld and the last to be released during his lifetime. It was released on March 8, 2019, by Grade A Productions and Interscope Records. It follows his debut studio album, Goodbye & Good Riddance (2018), and his collaborative mixtape with Future, Wrld on Drugs (2018). The album's artwork and title are inspired by the Twisted Metal series of video games for the original PlayStation console. The album features guest appearances from Brent Faiyaz, Clever, and Young Thug. Death Race for Love includes the Nick Mira-produced lead single, "Robbery", which was released on February 13, and the Purps-produced "Hear Me Calling", which was released on March 1. The album received generally favorable reviews from critics and debuted at number one on the Billboard 200 with sales of 165,000 album-equivalent units. It is Juice Wrld's first US number-one album and was certified gold by the Recording Industry Association of America (RIAA).. 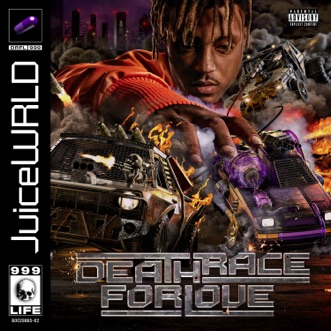