Decade after decade and George continues to produce fresh and fantastic music. This album is great. Love “Every Little Honky Tonk Bar!”

I have been in love with George’s music since i was a little girl. He has been my hero for so long and i wish more than anything i could meet him! i have his calendar, some tshirts from his concerts, posters, and have sent him so much fan mail over the years.. This album was amazing. I bug all my friends at school to listen to it sometime — it’s so much better than modern day country. I read some of the very few bad reviews on this album and was truly heartbroken. Please don’t take their opinion seriously, especially if they prefer modern day country. Seems nuts to me. But anyway i love his music and he’s the king of country and always will be!!! we love you George!!!

His voice is as pure as ever, he is such an amazing performer, this album just adds to his wonderful collection of work

I’ve been listening since the beginning of his career. Heard him many times on the way to the county fair with the horses. Love you King George and thanks for the best Country music of all time.

EVERYTHING Mr Strait touches is gold. He can sing happy birthday and it’s goin platinum. If Texas had a Mount Rushmore he’d be up there!

I first met George at the Dairy Queen in Pearsall, Texas about 35 yers ago. He was a true down-to-earth Texan then and remains one of the most gentlemanly humans today. Always great music from one of the very few remaining COUNTRY artists.

This man is one of the few that I’ve bought every album that he’s released. Beautiful music.

I just saw him in concert at the T-Mobile arena and he played god a country music, codigo, every little honking tonk bar and took us back to the old days with some oldies of his and some other artists! Gotta say thank you for supporting the badge in which he did sing that song! when I get paid I will be buying the album

Always THE KING of country - Best yet

True COUNTRY music. It's hard to believe through all the years that George and Willie never "hooked up". Awesome tune, wish they would collaborate on a whole album. Hard to believe but the KING does get better with age seems to out due each previous album.

Gummba - The King is still teh King

Best album of the year!

We need more of this country today. I love Every Honkytonk Bar and God and Country Music. The king of country music is back!

Thank you, George Strait, for the sound of true country, and for your tribute to those who go out each and every day for their communities, behind the weight of the badge. Your voice at 67 is still GOLDEN. I'm so happy you have Bubba in your life to co-write these songs, not to mention the incomparable Dean Dillon! George Strait, you are so blessed, and the world is a much better place with you in it.

George is the man. Period!!!

Listen to only a handful of country artists. And George tops the list. Just wish I could see him in concert.

he did Old Violin better than johnny... KING!!

George Strait still stays in touch with who he is. This is a great record. I think he’s gotten better since breaking away from the machine.

wabadowA - Can this be considered 80’’s country

LOVE this song! Every time I hear it(no matter where I am) makes me want to dance...so here at work all I can do is shuffle my feet under my desk, but once home it’s two stepping down the hall for me!

This is the best album by George Strait that has come out in years.

Love his voice!!! The emotion and heart he puts into singing is unreal

The man the myth the legend Mr. George Straight lives up to his title of the King of Country! Forever love every lyric he blesses this world with!

Thank you George Strait for blessing us with your music.

This album is a time machine back to great country music.

George Strait is, and always will be, the king of country music. Fantastic album.

Thank you, George! I’m sitting here with a big smile on my face enjoying your beautiful music. Just a wonderful experience listening to my favorite artist, you never let me down.

This is the real deal. I have always loved George and this album is exceptional. I find myself humming some of the songs throughout the day. This is when a song is done right. I love Blue Waters. I live by the beach here in FL so it means that much more. I bought this entire album and recommend that you guys all support Real Country Artists by buying their music vs streaming.

He is the real deal! Class Act and this is country music! Love George Strait!!!

After getting burned with the auto tune sound on 'the cowboy rides away' I think I'm smellin' a toned down version of it around here to, or is it just too much reverb. You be the judge. This unpure sound is especially abrasive on the first track:-( Nice songs/album just wish some of it was much less engineered with a more clean sound.

I’m always a little nervous when an artist who has been around for a while puts out something new because they’re tending to not stay true to what made them great. This is just classic George Strait though. Country music at its best. So thankful that The King is still doing what he does best.

Never disappoints in a any album!

Jaegerak - It’s the King at his best

Once again George Strait has released the perfect country album. Showing once again that torn jeans and shiny jackets are not necessary for making great country music.

In my honest opinion, every single one the songs on this album can be hit singles alone. The best to ever do it, does it again!

kenadiking - Country is the best

It is so good

The King of Country is still the King

If you ever found yourself lost drifting wandering and just generally not sure about anything then there comes Mr Strait with another awesome record! Sit back listen drink a Shiner and welcome to Strait Country! A big salute to George Strait. Thank you.

I’m a genre of sell out crap, George stands as a beacon of what country music is supposed to be. Great album.

King George does it again!

better the old one - A bit better than average

A lot of the songs are very repetitive. The main chorus is repeated too many times in some songs. Gets boring fast. The album is still great but beware before buying the whole thing!

The king of country nailed it again. This (and he) is true country music. ♥️

There will never be another King of country! This album is amazing ❤️

EMT1ACE - Time Machine is a Comeback...

It's in the title! Honky Tonk time Machine! It feels like a comeback of sorts! It's a reminder that Great country music is still being made! (Even if it isn't a commercial success.) And for George Strait, I don't think commercial success matters. Yes! He represents an era of country that has been kicked to the past, but that doesn't mean we should forget it, or wish it away! This is what country music is all about, memroable stories, great melodies, performed by great artists! He sticks with what works, or... Is it whatworks sticks with him??? For the person that said The twang crap should be forgotten, and that George should retire! I say this, most of your new country would say George is an influence, and a legend! Too bad that don't just sit down and give this a listen and see what is wrong with what they are doing!

The entire album is up to his usual standard.......excellent

Love it! Every song is awesome, it's classic George Strait. The "Weight of the Badge" song hits home, it has special meaning and the rest of the album is just as fantastic!

Love, love, love but it’s by George Strait so I wouldn’t expect any less from him.

@LewisCapaldi right where he should be....next to honky tonk time machine

What do you think Honky Tonk Time Machine album? Can you share your thoughts and listen experiences with other peoples?

Honky Tonk Time Machine is the thirtieth studio album by American country music artist George Strait. It was released on March 29, 2019, via MCA Nashville. The album's first single, "Every Little Honky Tonk Bar", was released to radio on February 11, 2019.. 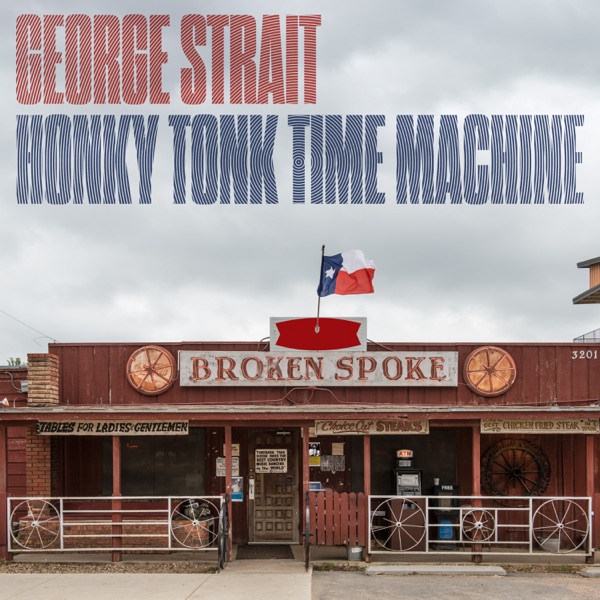