MercedesToby - Worst Song of the year

Worst song of my lifetime.

nvrgiveup - For the ratchet and uneducated

The only reason this song is popular is due to cardi’s following. It’s unfortunate that her lack of raw talent indicates that she can still influence her followers. She has to be controversial or add anther popular talent to stay relevant. I get why the kids like her, but we should praise those that are truly talented. Unless she perfects her craft she eventually will fall off. But then again she’s good at pole dancing.

Cardi b is garbo

I think most of us like this song cuz it’s a big mooood ngl. That being said,,, ITS A GOOD SONG

the song is catchy and good.

Henny this is a great f-ing song but ugh... like really? This is what stays in the top 10 in charts in the US

Lighten up, it’s a fun song.

Carlos_souza_official - Song of the year!!!

the lyrics aren’t even lyrical

Garthfis - Wrong in so many ways

This is not music. This is trash lyrically and musically. And to think this woman wants to be taken seriously?

This is what y’all call rap these days? Stan bts and nicki and doja instead 🤪

ew🤢🤮😷 - WHAT HAS HAPPENED TO THIS WORLD.

It is so sad that this song is so popular. Praying to God everyone will repent...

Is this really what music has turned to pathetic

Cardiiiiiii .... I never used to listen to her music but this song hiiiiiits

One of the best songs to ever exist

the lyrics are so bad and give such a bad image to women to say that this is all they are. No, just no. Horrible lyrics, everything else is pretty below par.

This song make me dance 💃🏻

What is happening to people these days, it a total garbage and such a downgrading to what a women represent, in powering women my A**, this music and this garbage b***** dose not represent women and n any way

When I first heard it I wasn’t sure about. The song ended up growing on me.

I don’t care what nobody says this song was iconic

This is not music. It’s nasty.

ShadowHopperKnight - Finally we got some balls back in music

WhoIAm2U - Proof the industry is rigged.

Unless 90 percent of humanity are complete morons.

tre_again - Less than a star

As a woman who struggles against the sexism in the world, I don’t approve someone taking us back to the 1960’s. Just stop. If you don’t want to help, then walk away. Stop hurting our efforts!!!!

If I could give this ZERO stars I would, but unfortunately that would mean no review. This song is complete trash just like the artist. Im terrified for our generation to grow up thinking this is R&B/Rap/HipHop. I really cannot believe this is the top song listened to right now. This song is a whole new level of "sexualizing woman". #Garbage #TrashMusic #ClasslessCardiB

How can anyone enjoy this trash

Why do you want to fill the young minds with filth? Shame on you ITunes!!!

Everyone’s mad because the song “degrades women” or they’re mad because these amazing women are rapping about their bodies. Male rappers rap about that all the time and nobody cares, even though they talk about both men and women most of the time, actually degrading women. Megan and Cardi are just proud of their bodies and these softies in the reviews think it’s horrible and disgusting. It’s a song that has a lot to do with s*x and if you don’t like it when it’s women singing then that’s too bad. I think this song has a great beat and it’s really catchy and fun.

No stars wasn’t an option

It’s sad that younger people (especially kids) are frowning up listening to this kind of music. Also don’t forget Cardi B raped, drugged, and robbed people.

Yooooooo this song is on respect 🔥🔥🔥🔥

Naughty, and not trying too hard. Into it

[email protected] I love it!!!

torontoraptor9 - even meg couldn’t save it

Can she stop making music I can’t stand her

The MV is decent but the song is garbage. I’m putting one star because of Megan but yeah

Love women pushing the boundaries. I like the explicit version better. Meg ate her bars.

Gonna get dicked down to this

I can’t believe people pay for this!

This song is horrible. Offbeat and mediocre lyrics, half of which aren’t even written by the artists. It’s unfortunate that this is what these two chose to come together to “rap” about. Music video had to use Normani, Kylie and Meg for relevance. This generation needs to do better and support real rappers and lyricists, not classless strippers and entertainers.

+ Megan and the song is still garbage. 😱😂

I feel like I lost IQ points, I would give zero stars if I could, Trap/mumble sh*t needs to stop for good.

Had an open mind for Meggggs but this is trash lol.

Lady_Skinay - STREAM MOVE YA HIPS INSTEAD

So bad , not worth buying

Thanks to all the outrage fans you helped me find this song :)

Nikki is streets ahead of this Ho...

This could be the worst song ever recorded

19lucky75 - How awful. This is disturbing in many ways.

Can the decency and standards in music decline any further????Can’t believe this muck is allowed. Feel sorry for this generation of young girls and women who look up to these so called artists and listen to such crap.

I’m confused as to why they put in a talentless..classless..fake body..Black D Hunter from the Kardashian-Jenner ‘heaux’ clan in the video..should have left her drowning in baby batter..her natural..preferred habitat.

They popped off on this track yasss

This song is ICONIC !!!!! it was an amazing comeback and is a powerful lead single !!!

Cardi and Meg both slayed😍

There's only one Chazmo - About as empowering as a livejasmin session

Why is it every time women rappers comes together it’s labelled as an “empowerment anthem”? Especially considering that vocal in the background. Utter crap

Sorry but who would want to listen to this s***

I just wanna go the strip club and watch girls pop the cats to this song periodddddt. This song is a whole bop

They clearly work on the beat and have good flows but the topic is a little grim to listen to.

You ain’t gonna last long fake, ugly and plastic AF! . Your whole ora and demeanour is trash you belong on a pole you are not an artist. Flapping those lips and that voice 🤫 🇮🇹🇬🇧🇪🇸🇲🇽Girl bye 👋🏽

*Carlotta* - Does it all

5 stars for two women on the top of their game singing about what they want to sing about. I’d add another 5 for getting all the puritans and misogynists in the comments so damn PRESSED, rock on Cardi and Megan

Loveeee this song, keep going Cardi your doing great. Bardi gang got you we getting this to number 1🔥👠❤️

Had to buy the song as soon as I saw the video, so catchy! Two confident women owning their sexuality has got so many people triggered, I love it!

The song goes against everything strong feminists have preached for year! So much for empowering women this song goes against that! Radio should not be able to play this vile song! I normally like Megan’s music but this is the worst I’ve ever heard... they both need to be introduced to flow they cannot ride the beat!

Best collab of the year yaassss🔥🔥🔥🔥🔥

Can’t believe a song about having a wet p***y is even charting. What has music become!

What is it with black people using the N word in crappy rap songs and yet as soon as a white person says the N word its omg lets have a protest and steal stuff from shops its a joke!

Song of the year

Queen and princess ended everyone

underscore10 - CARDI IS BACK

This was such a good collaboration! The video is insane! The explicit version is something else. Can’t wait to hear more from Cardi B, it’s been too long!

CJ loves tattoos - CARDI B IS SUPERIOR TO NICKI MINAJ, the real queen👑

The beat sounds like any other generic rap song and they both rapping OFFBEAT. Save your coin for something better sounding. Clearly this was a business collab, nothing organic or natural at all about this song

Cardi’s verses are trash. Meg did her thing though

cardi b is so irrelavent lol

THAT... that is what they did.

@hosthetics: instead of streaming #that, stream the #1 song in the world. Cardi B featuring Megan Thee Stallion. 🦋 …

@millebiennium: i’m hayden christensen and my kiss 92.5 song of the summer is WAP by Cardi B feat. Megan Thee Stallion

i’m hayden christensen and my kiss 92.5 song of the summer is WAP by Cardi B feat. Megan Thee Stallion

What do you think WAP (feat. Megan Thee Stallion) song? Can you share your thoughts and listen experiences with other peoples? 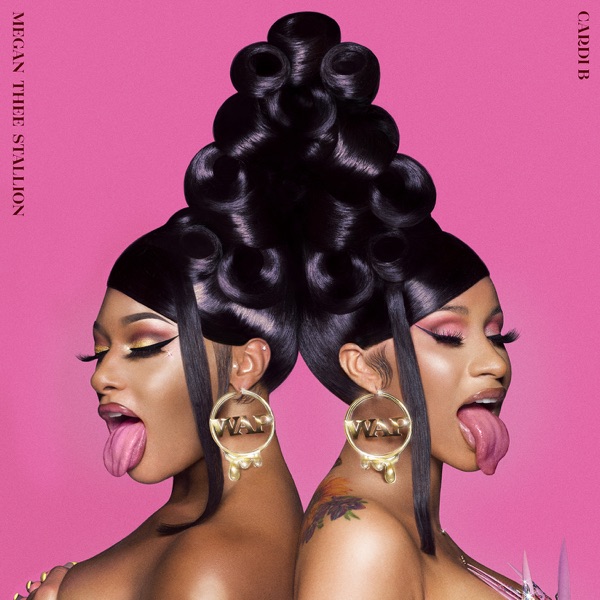