DJ Durel
Murda on the beat, so it's not nice (Go)

I got too many diamonds on, I look awesome (Ice, get right)
Yeah, after I hit that hoe, she need a walker (Smash, get right, uh)
I done shook them problems off, now I'm bossin' (Woo, get right)
Yeah, stack the money tall, back to ballin' (Get right, Takeoff)

Big boy Rolls, swerve the lane, I be hoggin' (Big boy Rolls)
Lit four blunts of Cookie, musty, yeah, it's foggy (Cookie, woah)
I can park it, stick be sparkin', do no talkin' (Brrt)
Watch me hit the target, mark the carpet, then depart it (Offset)

We don't give two fucks (Two fucks)
Choppers hangin' out the Rolls Royce truck (Pop 'em)
Go play with your kid, 'cause I up (Up)
She broke, so why would I cuff? Ayy
We rich, lit, we 'bout to go up to space (Lit)
Gold toilet, I took me a rich shit (Woo)
'Cause I have racks on my plate (Racks)

I make you go get the bag, baby, we livin' the dream (Livin' the dream)
Gang not comin' in last, top ranked in loyalty (Top ranked)
It's a millionaire campaign, that's what it's supposed to be (Campaign)
Pray my soul to keep when I go to sleep (Uh, Huncho)

What do you think Give No Fxk (feat. Travis Scott & Young Thug) song? Can you share your thoughts and listen experiences with other peoples? 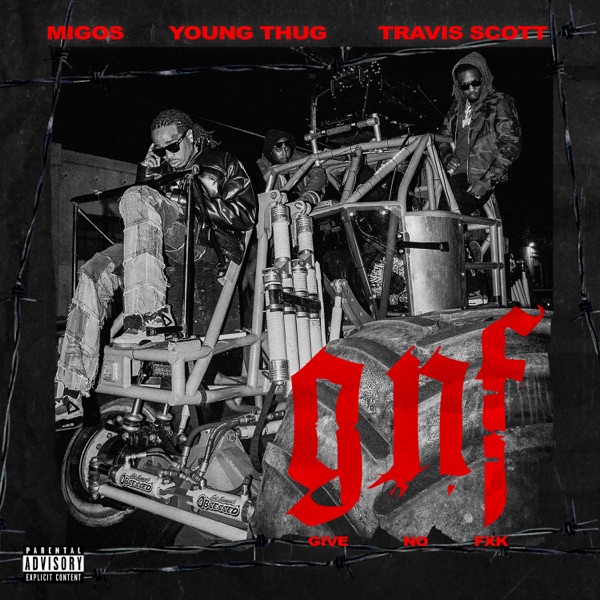