In love with this album. Perfect

I love this album!First best album!I was like 9 or 8 and I was like I WANT THIS!So I now have all your beautiful albums!And love Unorthadox Jukebox!And you went so far to the Super Bowl!

I love BRUNO so much! Ima hooligan!!!! And I defiantly love this album!!! Especially talking to the moon. Favorite song from this album!!

This is such a fun album with so many different styles that you can't stop playing it!

This is by far my fav album

J Esco914 - He will be the next Michael Jackson

Love his variety of music and tone

I used to listen to this album with my mom in the car and now I have it on my phone so now I can listen to it when ever I want too!It’s a must buy!

I love Bruno. I've been very supportive of him. I'm not a fan of him, I'm a Hooligan. He's my inspiration. Honestly, if you hate this album, then just leave. For those who loved it, I hope we all support Bruno Mars.

I recommend buying this its really great and somewhere in Brooklyn is the best .

I love the songs that Bruno Mars makes.

Bruno Mars Marry You is one of my All time Favorite Hits!! Mars music i listen to everyday!!!!

Bruno Mars is so amazing my heart just melts listening to his songs this is a total yes on my list! You should totally buy this album!!!!!

Måryjāńë - Best of the best

Bruno mars is so incredible. He sings very good and I love all of his songs. He is an amazing singer.

These songs are great I love Bruno and I always will. Love❤️ya!!

Awesome bring back the past!

I love the song count on me!

Kaylee mars - The most amazing singer!!!!

Bruno mars is one of the most amazing singers ever! He gets so underrated and it not fair. He's one of the only people in this genre of music that thinks outside of the box. In my view every song he writes should be on the radio. I love him so much and I can't wait for his next album! Hooligan for life!

He loves her in the video!! Great song!! What woman would resist lyrics like this?? Very cute song and the video is very awesome too!!!

Grenade-5/5 catchy, calm song talking about dying for people. Yea, sure it makes me think about wanting to kill myself but it's good Just the way you are-5/5 another, calm pop song that says people are amazing no matter what. Our first time-4/5 another calm one but it's kinda weird. :( Runaway baby-5/5 fun, fast and catchy! EPIC The lazy song-5/5 a nice chill song about wanting to be lazy. Marry you-4/5 weird, kinda generic, voice is okay and so are the beats

Great first album. I still listen to it everyday.

buy this right now especially the other side,runaway baby,grenade,the lazy song, and just the way you are

maddie b raps - album of the century

I cannot believe this album is almost six years old! I love all of the songs and I love Bruno Mars' voice so much! I listen to this and Unorthodox Jukebox all the time and I am so excited for his next album.

Omg I adore Bruno Mars I bought this as soon as I searched idc how much I cost !!

I'm a pretty big Bruno Mars fan! His voice is amazing and he was and still is one of my major inspirations in making songs and going after my singing career😝😎👍!!

NCSF29 - Remembering This Album From Seven Years Ago

Seven years ago, we were introduced to an amazing singer, dancer, songwriter, and musician. He has a lot of amazing songs with catchy beats and strong lyrics. His voice is truly pure beauty. And now in 2017, Bruno Mars has shown that he is an artist. There's no one like him. I'm listening to his debut album right now because it takes me back to when he was just becoming a star. From his first hit powerful pop single Grenade to his smooth, silky hit Versace on the Floor and writing songs for A-List singers like Alicia Keys, Cee Lo Green, Travie McCoy, and B.O.B., Bruno Mars is an epic artist.

This is... Terrible. I simply do not have anything to say about it. It feels dated and, to put it simple, not a fan of this pop crap.

BRuNO MaRS make a song about two best friends but....something happens between them

Love these songs sooooo much 🤩🤩🤪

I love the old Bruno Mars! The new one sings all about money and all that crap, but I love this album so much

I used marry me at my wedding

I admit,I'm fangirling. But Bruno is the Best.Singer.Ever!!!!!!! (Especially live) I freaked when listening to Our First Time for the first time.(In a good way) Just the way you are is so sweet and I could listen to it all day! Grenade is so amazing.IDK what else to say about it.Bruno is so amazing (and attractive...Omg AHH) and I love and gave 5 stars to every one of his albums. I wish I could give more but sadly I can't :( ):.This is a tragedy and I'll fix it by listening to his music all night (: :) !!!.haha I love you so much Bruno!!!! 😍

Zihao He - You won't regret buying this album!

They're all amazing songs in this album. I seriously mean it. I heard some of them earlier and I was obsessed with Bruno Mars. And now I bought it feeling so good.

Bruno mars is so good

Ever wondered if our generation will ever be able to see someone near as lyrically talented as The Beatles or Bob Dylan. Well, Bruno Mars is rising like a lotus from the heap of amateur singers around today. he has sparked such a creativity that lines like "her eyes make the stars look like they're not shining, Her hair, her hair falls perfectly without her trying” cannot even reach at his norm. Mars is certainly a shining star who will never die out.

Omg this is his best album ever

No one can beat his singing !!!Plus, this is way better than that jack person .you should buy this because the second I played it I new it was the best song ever

What do you think Doo-Wops & Hooligans (Deluxe Version) album? Can you share your thoughts and listen experiences with other peoples? 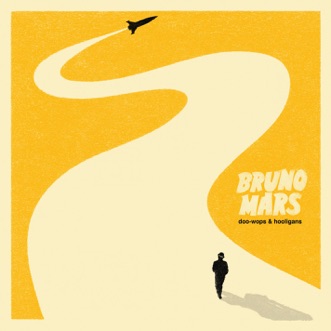