Why are you listening to this music. All it is is a ton of electronic software, a guy rapping, and a drummer. The technology that people can use today can create that song using a computer. Music was created to bring out certain thoughts and ideas, straight from the person. This music just repeats the same words to make the song longer. If you want some real music, look for artists that aren't that popular. The record producers look for rappers because thats what makes more money. If you really care about music, then listen to beatles, rolling stones, kansas, elvis because the older songs have to best rhythms and parts because they found them out and put them into their songs before anyone else could. So, if you like this type of music, then cool beans.

JEEZY, RICK ROSS, USHER, GOOD FLOW PUT THIS THING TOGETHER, BUT CMON MORE DRAKE?? HES WACK STR8 UP. FAKE AUTO-TUNE VOICED RAPPER. HE WAS ON A KID SOAP OPPERA CALLED DEGRASSI OR SUM, HE WAS BORN RICH, IM JUST SAYING IF YOU LIKE HIM, YOU DONT LIKE REAL RAP/HIP-HOP. YOU LIKE POP. SO WHILE YOUR AT IT GO LISTEN TO SOME MILEY CIRUS, MAYBE YOU'LL CALL THAT THE HARDEST TRACK ON THERE. BRING THE WESTCOAST RAPPERS BACK!!

This song is nice, but the version with an added verse from LIL WAYNE makes the song 5 stars

but lil wayne is in my version and its sick

Dan_Aroi - Had to have it

When i first heard this song I rushed on iTunes and brought it. It's nice with all the artist in there, it's just like forever by drake all over again

this song was alright. ive heard much better

Without Drake this song would be nothing!

This is one of the few songs that DJ Khaled doesnt say his name more than 10 times...therefore it is a good song..sick beat

This is the reason hip hop is dying. Whatever happened to the kick back hip hop songs that actually tell a story? Nas and Lupe Fiasco are the only ones keeping hip hop from becoming extinct!

This song kills it mainly cuz of drake and usher. i luv this song. i dont know if anyone else thinks this but i would laugh so hard if a single came out where it was only dj khaled cuz "he da best!" lol

Jesse Williams - Like the IRS you wonder what I make yearly

This song is hot

Scathe - I remember when i used to like this garbage

That was before i discovered the true meaning of Hip Hop. I'm grateful to have realized my foolishness and to have turned to Underground and Indie Hip Hop.

Great song, but once again he takes lil wayne off the original version of the song just like we takin over...its just not the same without him lol

Not the best song ever made, but it is just so upbeat and good lyrics I had to buy it.

this song is the best.Usher and Drake killed this song and Rick Ross and Young Jezzy were good too

ummm 2whoever DJ Khaled isnt a singer.... why do u think theres a "DJ" in front of his name

BrittanyMichelle<3 - Aye! No no no.

We do NOT hate on drake. He's amazing. He's ALM0ST better than weezy. ALM0ST.

Weezy wouldve ripped this. Drake shouldnt do songs without him. Weezy is the only reason drakes songs is hot. Dear Drake, Weezy Made you.

This song is only good thanks to usher

You haters amuse me. If you don't like drake etc why are you on here? "hip hop is dead whaaa" STFU drake doin his thing and you haters can't stand it!

Usher is the best rapper in the song and in the game right now and has been for a while!

This one cool but the one wit wayne a 5 star +

The beats are awesome! GReat music and awesome singers Usher-5/5 He steals the song! Im not used to the N word out of his mouth though Young Jeezy- 4/5 Good verse. Jeezy is a good featuring artist but PLEASE lower yourself on the N word Rick Ross- 3/5- Well okay better verse than All I Do is Win. But WHY is he in every Dj Khaled song!? Drake- 4.5 He did his THANG! Not his best though. GREAT voice for a rapper. Why is his verse so short he rocks! Lil Wayne- 4.5 One of his best verses in his WHOLE LIFE! Khaled-FAIL!!! Constantly yellin his name in songs and the backround. SHUT THE HELL UP KHALED NO ONE WANTS TO HEAR YOUR FREAKIN VOICE IN THE BACKROUND IF U WANNA RAP LIKE THE AWESOME GUYS SING YOUR OWN FREAKIN PART!!!!!!!

Good song but why isn't lil wayne in it? there's a different one with him and he has a good verse

Khaled doing his usual great job of collaborating the hottest artists in the game and putting them on a crazy beat and basically just letting them do what they do best. Love every verse (Drake the best of course). Also, the video for this song is absolutely amazing. By far the best music video I've ever seen. Check it out.

short_chick - i luv u usher!

the best verse to me was young jeezy's and usher's. but i could listen to this song all day if i wanted to. (and i did)

everyone did good in this... when i heard Drake only had 8 bars in his verse i said what the hell... but Usher ripped it so all is forgiven. great hook and energy... Ross and Jeezy had damn good verses and Drake had a sweet lick too

they need to put tha remix with wayne on, that one's dope.

They were soooooo much better than this! The only thing good about this is Drake and Usher!

Usher nailed the chorus. Jeezy, Drake, and Lil Wayne never cease to impress. I've never really been a Rick Ross fan, but that doesnt change the fact that this is a great song. Khaled flexs his music muscles again.

why are you guys giving D.J. Khaled the credit? All his hit songs are not because of him.its beacause of the other people in the songs. all d.J. khaled does is yell WE THE BEST at the top of his lungs the whole song. if u have never heard D.J. Khaled plz just dont listen to him its just a waste of time. Overall though this is a great song.

I'm not mad at that

this is a great song usher makes it happen, drake does his thing, young jeezy good as usual, the only thing bout dj khaled tht i dont like is tht rick ross is in every frikin song dj makes

KrazyN8ive - y is every1 working with drake?

ok i hate degrassi, and i dont use the word hate lightly. now i hate drake. hes anoying as hell. weezy, drakes the biggest mistake you've made. usher & khaled, u cant make these guys great. y is rick ross even doing anything anymore? does any1 even rele like him? young jeezy isnt that great either. im sorry call me a hater, but this track has a band of punk rappers and a great singer. doesnt deserve 2 be a single. sorry ush

the one with wayne in it is better

it's better with the lil wayne verse

Itunes needs to get the version with lil wayne on it. He murders it...

TO ALL THE PEOPLE WHO DONT KNOW, DJ KHALED IS NOT A RAPPER! HE IS JUST A GUY WHO MAKES THE SONG AND BRINGS RAPPERS TOGETHER TO SING!!!

Not sure how this guy is still selling songs. this is terrible... hes just terrible him and lil wayne should just sleep for the rest of their lives...

THIS SONG IS AMAZING ALL THE RAPPER'S IN THIS SONG HAVE SICK BEATS AND LIKE ALWAY'S DJ KHALED DOESNT DISSOPOINT IT IS A MUST BUY GUARANTEED YOU'LL GET HOOKED IT'S THE BEST SONG IN A LONG LONG TIME.

lil.wayne.songs.me.fav - the one with lil wayne

the one with lil wayne is better

Dj KHALED is garbage and so is officer ricky... I would support 50 before these jokers.

I'm not reccomending this song because of Rick Ross' verse. It breaks the song.

this song sounds like everyother DJ Khaled song. same beat, same rappers, and same RNB chrous. i would like to see something different from khaled. this song is boringggg. Drake is the only good part of this song

Third Atlantic - DJ Khaled Is On His Way To Victory!

Another amazing song from DJ Khaled, You gotta give it to the guy for gathering such amazing acts on one amazing song - with an amazing chorus! We The Best!

DONT GET THIS!!!! 99P N IT DOESNT EVEN HAVE LIL WAYNE'S VERSE N HE KILLS THIS TRACK

What do you think Fed Up (feat. Usher, Drake, Rick Ross & Young Jeezy) - Single album? Can you share your thoughts and listen experiences with other peoples? 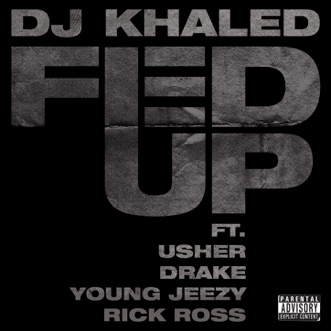