Lock Up the Wolves by Dio Album Reviews

stelioskontos - Born on the sun

one of my favorite dio tracks, amazing solo

No it's not Classic Dio (Holy Diver, Last in Line etc..) but man is it good. After dream evil (not a terrible album but certainly not his best) Dio changed his sound. And man was it for the better. Reminds me of the sabbath days (actually foreshadows what is to come with "Dehumanizer") with the chugging heavy riffs and masterful guitar solos. The lyrics are on point as well! 80s Dio was known to be a tad cheesy in the lyric department but this is not! What more can I say. If you're a fan of Dio or metal/hard rock in general you need this album

For me and many of my generation Dio was the voice of metal. But!! Replacing Vinnie with Simmone Wright? I know Vinnie's shoulder was shredded at that time and Dio had to replace him. I will never understand his choice in Simmone. Tommy Aldridge, Deen Castronova, Boby Rock are just a few drummers that were avalible at the time.

Great song, the lyrics are perfect.

This is the album launching Dio and a fairly new crew lineup into the 90s.. Still some fantasy songs but political and emotional ones too. Neat title track plus Wild One and Queen On Evil Street make for awesome numbers. This album holds up well to all the 80s dio albums and you won't be sorry getting it. Trust me on that. \M/ \M/

This album is yet another masterpiece by metals patriarch of melody and rock solid music that touches many fans and newcomers alike , the production and arrangement of these tracks is just a beauty to behold. Really the closest in an honest way to blend rock, metal and blues into a balls out , foot stomping celebration of amazing musicians and musical ideas

A voice just doesnt get better than dio. Hes a short guy with a loud voice!

aaronhope - Fantastic Work of the King of Metal lml

Next to Holy Diver and Dream Evil, this is my favorite Dio album. I love what Rowan Robertson brought to the band with his bluesy riffs and mystic licks. Dio's voice has never been more powerful (except, maybe in Dehumanizer, get that one too :)) and I am appalled at the amount this album has been ignored. It's just incredible. It sort of had to grow on me but I love all the songs now, especially the title track, Between Two Hearts, Evil On Queen Street, Walk On Water, and the glorious My Eyes. The latter is a classic when it comes to the Dio we loved on albums like Heaven and Hell and Holy Diver.

Had a friend not turned me onto it, I would have missed it completely, only because by 1990 Dio and the genre in general had begun to wane. The guitar work is outstanding and the lyrics (especially on "My Eyes") are some of Ronnie's most introspective. Now that he's passed they seem all the more symbolic.

buy this buy them all. dio is, was,and will always be the ultimate voice of metal

See ya in hell. Missed but never forgotten

Walk on Water is one of the best songs Dio has ever done. It is a must have for any Dio fan.

This is my favorite Dio record. Ronnie's voice was in its prime and never sounded better before or since. Rowen Robertson is one of my all-time favorite guitarists and the best Dio ever had, no disrespect to Campbell, Goldy, Aldrich and G (haha). He could do things with the guitar that none of the other guys could do. It's indescribable to me. A lot of people like to whine about this record because it's not full of speedy rockers, but when the hell was Dio ever known for speed? Get real, people. And get this amazing masterpiece of an album.

For a fourteen year old doing all the guitar on this entire album, I would say this is better than black sabbath! Buy all of their albums, and trust me you will not regret it.

I have owned every single Dio album/cd ever made and this is by far the best one he ever did.The guitarist on this cd has only done only one with Dio and this is it. He has a bluesy style of playing leads that is just not found on any of the other ones. If you don't own this, you are missing essential Dio!!

Long dismissed by critics and fans alike for it's slick production and polished songs, Lock Up the Wolves is actually one of namesake Ronnie James Dio's finest hours. Emerging from the rubble of 1987's Dream Evil release, Ronnie had taken some much deserved time off (he had worked the major label record, tour, record...circuit from 1976's debut Rainbow release (and three more) onto Black Sabbath for three records and then finally bursting through as a solo artist and bonafide arena headliner in his own right with 1983's Holy Diver) Dio realeased an album a year (Holy Diver, The Last in Line, Sacred Heart, Intermission amd Dream Evil)and toured it worldwide every year through the conclusion of 1988's Dream Evil tour. By this time Dio's "dungeons and dragons" approach to hard rock had run it's course in the face of packaged LA hair bands and denim clad thrash rockers. Ronnie had seen the hard rock audience that he had essentially built, split right down the middle with both sides choosing a different style than his. Change was in the air and a fresh approach was needed. After taking two years off, Dio regrouped with a brand new band around him including current drummer Simon Wright (ex AC/DC, UFO), and 16 year old British guitar prodigy Rowan Robertson. This would also be Dio's first recording since 1981's Black Sabbath opus Mob Rules that he did not produce. Tony Platt was brought in to lend a fresh set of ears to the group. Mission accomplished. The band sounded rejuvenated and vital, as if they had finally gotten past the successful Holy Diver musical formula that had become stale and run it's course by Dream Evil. Lock Up the Wolves showcases Ronnie's voice like no release has before or since. The simpler arrangements (the basis for fan and critical furor) allow ample room for the songs to breathe and develop naturally, not only enhancing Dio's voice, but allowing space for the brilliant young axe slinger Rowan Robertson to shine. The group explore new styles, not just the fomulaic, "slow, medium and fast" songs. Dio pays homage to Led Zep during the powerful "Evil on Queen St.". He carry's a simple, beautiful melody into "My Eyes", and explores more complicated topics on such gems as "Born on the Sun", "Hey Angel" and "Between Two Hearts". While Dio had a built a career on "Neon Knights" and "Heaven and Hell" style songs, it was the forgotten gem of the aforementioned album, "Lonely is the World" that provides the most familiar musical comparison to Lock Up the Wolves...mature, intelligent and full of emotion. From start to finish, this is a complete album that has stood the test of time and may prove to be a tremendous addtion to your collection.

Rocknnrollforever - This is an awsome album

@AnneLouiseAvery: Are we doomed, the grey wolves asked each other, when they gathered up in Finegeld Woods. The drifts were six foot dee…

looks up her green eyes lock with that of one of the wolves.

@isszzy1208 @MusingsHistory The Black Caucus are wolves in sheep's clothing. They voted with Biden and the Democrat…

#FPL that result serves Wolves right. You never get the sense they have any ambition other than to score a single g…

#Nowplaying DIO Lock Up The Wolves

@Sing4ThaMoment Yah Yah Lock it Up Wolves (Big Sean) Body Language Why would I stop? The Baddest Before Love came…

What do you think Lock Up the Wolves album? Can you share your thoughts and listen experiences with other peoples?

Lock Up the Wolves is the fifth studio album by the American heavy metal band Dio, released on May 15, 1990. It displayed a complete change of musician line-up over the previous Dream Evil album, including eighteen-year-old guitarist Rowan Robertson, and Simon Wright on drums who had played with AC/DC from 1983-89. The song "Evil on Queen Street" takes its title from a deli in Toronto which had a sandwich with that name—per Dio on Much Music in 1990.Guitarist Rowan Robertson states that two more songs were written and demoed for the album but left off at the decision of Wendy Dio: "‘Hell wouldn’t take her’ and ‘The River Between Us".. 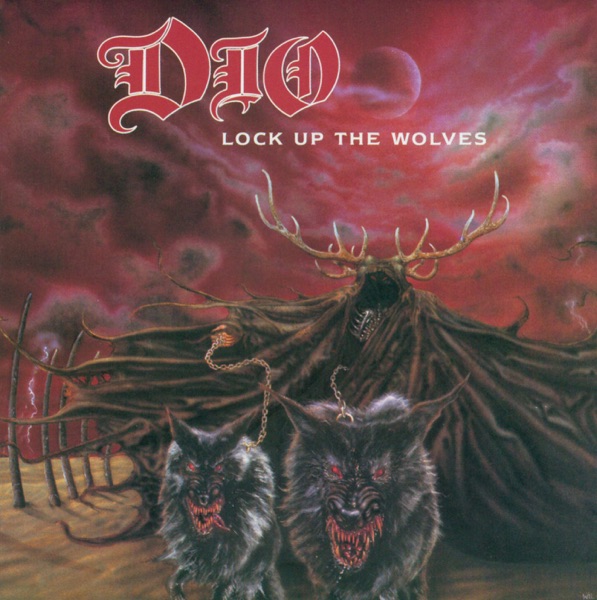 Lock Up the Wolves Album Credits

Lock Up the Wolves Similar Albums