paposse - DOWN TO THE BONE

Where is that CD at ITUNES...Come on get your act together !!!!

Look at the title

Obviously this album has the two biggies but otherwise there's nothing here. Easily one of the worst bands to come out of the 80's. Literally a two hit band.

Bucking Broncos - COME ON AND FEEL THE NOIZE!!

I used to play this album all the time as a kid,I wore out my tape.Im so happy to own it again digitally!

jeodee - Thanks to Randy Rhoads

After the untimely death of Ozzy's lead guitarist Randy Rhoads on March 19, 1982, Quiet Riot came to fame. In face, the song Thunderbird was written in his honor. Many great, catchy songs that took me by surprise. Unfortunately, Kevin lost his life as well. This album brings back a great many memories from my younger years and I'm glad I found it on iTunes.

As a metalhead I enjoy multiple genres of metal. Death, doom, black, metalcore, yes even nu-metal. Then there's glam metal (AKA hair metal). Which is in a nutshell 80's pop mixed with metal. Glam is something that I really want to get into but it's a hard genre to enjoy for a metalhead that listens to mostly grind or death. However, while browsing threw the iTunes metal section for a good album to headbang to, I found this. Metal health by quiet riot. It looked like a death metal record, I loved the artwork, so I gave it a listen, and to my surprise its a glam metal album. And a VERY good one at that. I was shocked to be honest, and I have been listening to this non stop for weeks. This album offers something for everyone. Metalheads, pop fans, it's truly a treat. So put your horns up, and get ready to headbang \m/

KrunchDown - Took 2 to not come close

I remember the period in the early 80s when this was released for one particular heart-wrenching reason. That year two guitarists had to fill the recently departed Randy Rhoads’ immense shoes. Carlos here in QR, and Brad Gillis with Ozzy’s touring band.

I just discovered them and I'm amazed at how good they are. Amazing album.

Whats there to say about this record that hasn't been already said? R.I.P. Kevin. Fly up Thunderbird. Love, A 14 year old fan

This album takes me right back to my high school years.... The best years of my entire life, not a care in the world....

…I remember walking down the road in my old army jacket listening to Come on Feel the Noise on a Walkman….Quiet Riot and Nazareth….oh yeah...

Thanks Hyundai for helping me remember how much I enjoyed listening to Metal Health in '83, wearing out the cassette on my boom box.

I remember walking around with my radio listening to this album and kissing Jodi from around the block. Also Quiet Riot / Armored Saint at the Becon , first concert. Sweet. There special, there one of a kind ........

This is my favorite QR album! But to the reviewers, don't you know QR made "Thunderbird" for Randy Rhoads? You don't have to be that harsh to that song...

This album is awesome! It's kinda sad that the band couldn't make another great album like this.

There are few pop metal artisis I like. Quiet Riot makes an example other pop metal artists and pop metal wanttobes should be more like. These guys have the talent to make it work. favorite song here: Danger Zone. Check out the album Alive And Well.

From start to finish, this album is excellent!!!

Quiet Riot's Metal Health is a genre-defining that any metal fan must own, if for nothing more than the title track. Metal Health will drive you mad, because you'll wonder why this uber-talented band could never make another release this good. I guess the stories about Kevin DuBrow are true, he must be immpossible to work with. I love Carlos Cavazo on this album, amazing guitar player and an under rated forgotten hero os the 80s Metal era. If you're a fan of 80s Glam & Heavy Metal, "Metal Health" is the album for you.

Grew up on this album, been listening to it for a LONG time and it's just as good now, as it was when it first came out. If you like one song on this album, you like 'em all. A must buy!

I love this band although they got much critisism I believe this to be one of the greatest metal albums to date. Every song on it is a classic. and i disagree with the review because the follow up condition critical also sold millions of records and is a great album as well.

Demons curse - Quiet riot and you

From start to finish, this really is a good album. Any old-school metal-head should be able to appreciate this one.

Loved it back in the day, but now I'm almost 30 years older, and it's not doing much for me--it's more about the memories associated with the music than the music itself. . .but I still giggle like a little girl when I listen to the lyrics of "Let's Get Crazy". Don't think there's a tackier line in any song, ever.

This is indeed, the one album that set the pace for the 80's Metal Scene. It broke boundries. Like AC/DC... This album made everyones list. The hoods, the ropers, the preps and the jocks... all paid homage to this release. This was like the Breakfast Club of the 80's.

This album still holds up well. This is the album that kicked open the door for the hair metal bands in the 80's.

The whole album is fun hard rock/metal, and even the goofiest songs are fun to listen to. The ballad "Don't Wanna Let You Go" is even more poignant given that it was written about Randy Rhoads leaving the band to join Ozzy. Great stuff.

FIrst off I don't know why Kevin Dubrow's voice was characterized as a growl to me it seems higher or rather like a razor blade (as Blackie Lawless of W.A.S.P. fame put it). Banali provides some good drum works and while Carlos Cavazo is no Randy Rhoads he can shred and tear it up on the guitar fairly well. Plus Rudy Sarzo's rhythmic almost classical bass playing and vocal backing just makes every song on this album great. The title track just sets the mood and makes you want to bang your head. "Come on Feel The Noise" which is a cover by the band Slade is just taken to a greater level altogether and demonstrates why it is one of the best rock/metal themes of the 80s. Every song following these sounds almost the same up until the touching ballad Thunderbird written by Dubrow for his former band mate and friend Randy Rhoads. The album and songs seem cheesy but at the same time it just works and the 80s were about corny stuff. Check this album out you will not be disappointed RIP Kevin

Quiet Riot was the premier metal band of the 80's. Every single sone of Metal Health is fastastic.

It says C*m on Feel the Noize, but why the *? Why not C u m on Feel the Noize? Is it too inappropriate? I don't think so. I think it is blank. No thanks, it doesnt work for me. A bunch of apples won't even do. Nope. Not at all. Nice try though. Great song too. I don't know...

Trust Me I Hate almost every glam metal band but this album & Band I kinda like. Like Scott Ian said on The 100 Greatist Hard Rock Songs He Said you have to give them credit cause kid's heard that and said ya Heavy Metal I Like this i'm going to check out other heavy metal It's a good album

Great songs! All of them!

What the heck!!!! who ever wrote the Itunes store review is freeking insaine!!!! they bash almost every song except for Metal Health and C*m on Feel the Noize... Either it was some lame-o pop music lover who was forced into doing it cuz the usual metal guy was out sick that day, or the usual metal guy is a total tool

Smiling Goth - This Album Rocks My Face Off

Seriously. From the time it got released.... and at long last til today. Rock on. Kevin will be sorely missed.

How about putting the videos on itunes..... so I can buy those

This is clearly what music is supposed to be. Amazing guitar and singing. BUY METAL HEALTH AND C*M ON AND FEEL THE NOIZE. Those songs are simply amazing.

Kevin Dubrow thank you for the early Metal years .There is no doubt in my mind when you think of Heavy Metal you have to think of Quiet Riot and all your hard work wasn't for nothing Once again Thank you R.I.P. October 29 1955-November 25 2007

Let's all bang our heads in memory of this awesome metal singer.

Rest in peace Kevin, all the headbangers will miss you.

Thanks to the new Footloose I now know who Quiet Riot is! They defiantly have some good classics.

The Lead Singer's Kevin DuBrow This Album Includes Come On Feel The Noize.

This was the first album I ever purchased on my own, and although many people trash it & the band itself. I think it is a standard for any "Hair Rock"fan...

Let's face it. This album boils down to two songs, Metal Health (Bang Your Head) and C*m on Feel the Noize. It also comprise 9/10s of their career. But I digress. The really amazing thing is that the band didn't really want to cover another Slade song, and so did COFTN in over the top, bombastic style, in one take. The result was the megahit that brought heavy metal to the mainstream audience. You've heard it a million times back in the day, but it's just as good then as it is now. That's the mark of a classic.

What do you think Metal Health (Bonus Track Version) album? Can you share your thoughts and listen experiences with other peoples? 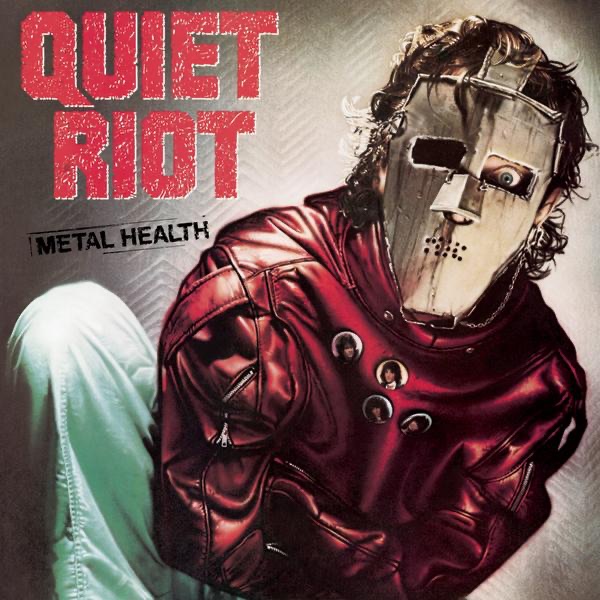