AJR always likes to really think about their songs and how to make them relate to most people in life. That’s what’s so good about these songs, is that they’re very relatable and always go out with a Bang!

Please don't rate this band if you're not a fan. These gentlemen have outdone themselves. They write raw and substantial lyrics for people to listen to. They don’t use women as subjective but write lyrics that are relatable to people.

Even though the whole album hasn’t come out yet, I am still very impressed and amazed by Bang!, Bummerland, and mostly My Play! Very exited for the rest to come!

I’ve heard three songs, and I already know it’s gonna be a banger!

Why does this testicular cancer of a band still exist 🤦🏾‍♂️

Bruhovaswitness - 2021 is going to be a good year😌

I got nothing else to say but YES!!!

Been a fan of these boys since I’m ready and then living room drop . Love there music and I can’t wait for this next album 💕😊😭👏🏽👏🏽so proud of these boys comeing this far

How can anyone think these lyrics have any ounce of substantiality to them? It’s kind of unbelievable, this band does make some cool music, but the lyrics are just garbage.

Been a fan since Sober up came out and loved it. I have been to two concerts already!

(Once it comes out)

i’ve loved them since 2014-15 and they never cease to amaze me, and i really hope that they receive everything that they’ve dreamed of having.

This is one of the best a lume ever, got me through a lot of hard times

just listened to my play and I’m LIVING for it! I am so excited for March 26th

I can’t wait for the album to come out! Bummerland is my favorite! 😄

It is amazing already. I’m so excited

I wouldn’t have it any other way and I love the emotional and deeper thought put into this one that really gets me into the lyrics of all the songs😁👍.

ZinjaTale - This one is ok

With 3 great songs off the album already released it looks like it’s gonna be another amazing album from three awesome guys, thanks Adam Jack and Ryan. May the Music u make continue to amaze!

Something good has finally come out of 2020 (Ik it’s supposed to come out in 2021 but it’s announced) My Play has unlocked a core memory and I love it!💙

it’s not even out yet. the three singles out rn are just that good

the pc kid - Why can we write a review without buying the song?

My friend likes them so I thought I’d give them a try. Like what I’m hearing!! All the people leaving mean and bad reviews probably never even listened to it. Rude.

The music so far has been amazing, but I think My Play should definitely replace Bang as the number one song, I mean Bang is good and all but it was released a year ago and My Play is definitely better

For the simple-minded. Lazy and embarrassing.

Nothing else to say

But for some reason when I preordered the album, My Play was the only one of the songs that downloaded. I purchased the other two as Singles earlier this year when they were released. Is there any way I could have Bummerland and Bang be under OK ORCHESTRA instead of under their own Singles?

Love these boys! Already pre/ordered the CD version of OKO! Can’t wait for the release!

I mean it’s ajr obviously it’s going to be amazing.

Ok maybe im just an orchestra nerd but i love the intro so much omg.

Can i get off ajr slander tik tok i’m sick of it.

Y’all remembered that in “Next Up Forever” in #Neotheater , Jack says; “Welcome to the Neotheater, won’t everybody take their seats?”...Now hear me out...what if...bare with me...what if...AJR said; “OK ORCHESTRA” in one of their songs or the first track, like Neotheater😱😱😱.

@kennycabenny ok cause i went to listen to it and yo... Imagine going to a concert and the lights go down and its just that whole string intro being played by an orchestra below the stage. Id actually lose my fucking mind.

Once again thinks abt the orchestra au fic but ok but what if kepler was not in fact the conductor.

Ok - imagine having an entire orchestra on your wedding march and wedding reception..

I was watching the vikkstar episode of the wheel and now i’m obsessed and binging the show.

What do you think OK ORCHESTRA album? Can you share your thoughts and listen experiences with other peoples? 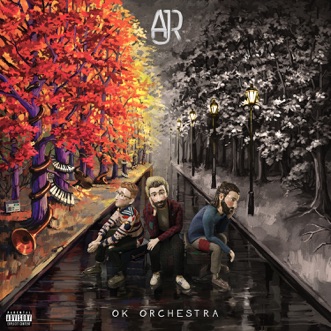