This one’s gonna be amazing. He’s done it again.

As good as it gets

This Double Album is 🔥🔥🔥 Morgan is the best ! Songs are so dope & i love the country songs so much ❤️

When Morgan first came out I wasn’t a big fan of his. These past couple songs and this whole album has changed my mind. Love it!!

He killed it , the preorders songs are awesome and we still got 22 more to go

Love the songs so far I know I’m gonna love the whole album. Had already bought Cover Me Up when you put it out... my favorite 😍

Hershey Kind the fifth - Why

Pure PERFECTION MORGAN!! Just like you!!! Don’t Change at all!! We love you !! Eff SNL and all the haters!! Such perfect musics song to song to song !!! 30 songs !!! Such greatness!! Please don’t change anything!!!! JR

Saw Morgan in concert two years ago when he was playing tiny little shows and I’m so happy to see him hit it big!! Such a good and genuine country guy that deserves everything he gets!!! Keep it up Morgan!!!!!

Why does the song somebody’s problem have don’t f it up instead of the cuss word?

10/10 morgan never disappoints, it hits me in all the right places.

what does pre order mean?? do you get every song??

His lyrics are always spot on and relatable but the production is really inconsistent, ruining some great lyrics

There has never been a song from Morgan I didn’t like. He just keeps impressing me. I cannot wait for this double album. He’s killing it 🙌🏻 Well done, Morgan 👊🏻

This album is so good Livin the Dream oh my goodness!!!! It is soo good I can’t wait to see u perform them!

lainehardyfan - HE IS PERFECTLY IMPERFECT

Great, honest, and genuine lyrics. He stays true to himself and he is so good at it. I’m excited to see the more fast paced and loud songs off this album. And I can’t wait to see him grow as an artist in the future. GAHTTTTTT🤪🤪

Ulk ulk - More Than My Hometown

I listen to this song over & over; GREAT VOICE!

His voice and his talent is amazing! He always blows me away:)

Listening to Morgan’s heartfelt and honest lyrics and yet variety of songs is refreshing. Great artist and great label who sets the bar so high with a sophomore double album. The sky’s the limit for them both!

The only reason I reactivated my iTunes account was to pre-order Morgan Dangerous and download Clayton Smalley’s Dirt Road Therapy. If you know, you know.

Travisnjulie - Talk about Blowing IT UP

Best album ever and there are few I can say I like all songs so far!

It’s only on preorder and already released enough music for a small album. Looking great so far 5/5

i listened to all the available demos on youtube and... i am in love! i can't wait for this it's going to be amazing

Playing this over and over! Going to buy the vinyl too.

This is an absolute treat of an album for any country fan.

And it’s a double album. Yuk.

Such a great talent, every song is amazing

and just like that, a career on the rise came crashing down

Morgan Wallen is everything you need in a country artist. The voice, the lyrics, the mullet! There is not a bad song on this album or the last one. I feel lucky to have this music and can’t wait to see him across the pond soon.

Outstanding album by Morgan. It’s sad that mainly White Liberals, who are triggered by something so small, can’t appreciate his music. Cancel culture will not win. People are starting to fight back against it.

Just stumbled across this and I love it !!

For any modern country fans, check this guy out. I’ve not yet heard a bad track from him and if these preview tracks are anything to do by this album will be his best yet!

Brilliant album, 4 stars my fave so far is 865/need a boat

Brilliant album full of great tunes. This guy can’t do a bad song.

Delete this album from iTunes. Zero tolerance with racism. www.bbc.co.uk/news/amp/entertainment-arts-55929170

You just get better and better 👏🏼

A host of great songs and a brilliant country album altogether.

Check out this new music album at Amazon: Dangerous: The Double Album [2 CD] by Morgan Wallen via @amazon.

We're already looking ahead to a @morganwallen #FreeMusicFriday! Text TENNESSEE to 68683 for your chance to win a digital download of "Dangerous: The Double Album" thanks to Big Loud Records! Details: .

Are you ready? Morgan Wallen’s Dangerous The Double Album will be out THIS FRIDAY, 1/8/21. Don’t miss him at Tailgate N’ Tallboys Peoria 2021! Tickets are available at .

Huge thanks to the great @KFJC897fm and Dangerous Dan for featuring us on his fantastic show (9th week in a row!) this morning! “Promise” from our double album DEUX ANGES kicked off the 2nd hour (after a station ID by @WillieNelson !). Thank you so much guys!.

@cathalina1972 I’m going to just guess a few days ahead (comes out on the 8th, but Morgan Wallen’s new double album “Dangerous”. Every song I’ve heard so far that he has released is straight🔥..

6 more days till the full release of @MorganWallen Dangerous: The Double Album!!.

We've got another #PickinParty! We're celebrating the release Tennessee own's @MorganWallen's "Dangerous: The Double Album" on January 12th! Watch the FREE show live from the Ryman on our Facebook page! Details: ! .

What do you think Dangerous: The Double Album album? Can you share your thoughts and listen experiences with other peoples?

Dangerous: The Double Album is the second studio album by American country music singer Morgan Wallen. The double album was released on January 8, 2021 via Big Loud Records and Republic Records on CD, vinyl, and digital download. The production on the album was handled by Joey Moi, Jacob Durrett, Charlie Handsome, Matt Dragstrem and Dave Cohen.Dangerous was preceded by the release of two singles: "More Than My Hometown", and "7 Summers"; and six promotional singles: "Cover Me Up", "This Bar", "Heartless" (Wallen Album Mix)", "Somebody's Problem", "Still Goin' Down", and "Livin' the Dream". The album also received generally positive reviews from music critics and was a commercial success. It debuted at number one on the US Billboard 200 and US Top Country Albums charts, earning 265,000 album-equivalent units in its first week. . 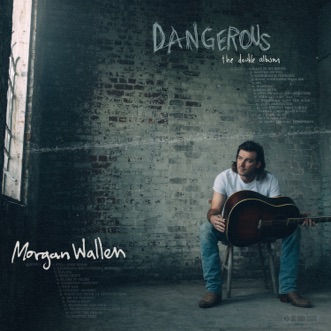