I love this album and it has a different song for every mood!!! I love Always Do and it’s my favorite song. I have this album on repeat for the whole day! Laroi is my new favorite artist. THANK YOU LAROI YOU SAVED 2020!

Every song in this Deluxe is good!!!!!! The 1st 7 new songs show why he is at rockstar status. Then you add the F*CK LOVE mixtape that released in July in case you haven’t already heard it!!!! Go listen won’t disappoint!!!!!

MewtwoXY - Kid Laroi Really Did Great With This

In my opinion, this Deluxe version of F*CK LOVE is some of Laroi’s best material. From the hype of PIKACHU to the loss of WITHOUT YOU, the ups and downs of these extras really get you into the life of Laroi. I would definitely recommend listening to all of these multiple times and adding all of the new songs to your playlist.

I’m not a real new wave guy but this kid is special.

This album helped me get through to winter break, next 🐐

Laroi next up. Dis only the beginning

this guy is the next superstar

Laroi songs are so goood♥️

They’re actually good but I have stream better albums......Tragic is the best in the album for me

annajwmws - This is such a good album

Music is great, just wish the tracks were longer

The Russians are interfering in our music and infecting the minds of our people with this garbage. I swear I heard a hidden message that said “vote for Biden”.

vic is to good - Okay

*Deluxe songs only* They are pretty good songs but they could of been a lot better I think. Should not have machine gun Kelly on here also, he suc Best tracks: Without You, So Done, and Tragic Worst track: Pikachu

SugarrShane - He does not miss.

The Kid Laroi has not written a bad song yet. Every single song is good, of course some are better than others, but he does not have a single bad song. This kid is the future and I’m excited to see him blow up!

This man has made straight bangers one after the other ever since Go. now stop reading this and listen to so done and without you if you havent already👹

AngelGarcia. - Here before he blows up

Omg he did it again

This blows the first 11 songs out the window. The way he has developed as an artist speaks on every song, especially, “Without You”. Hip-hop, rap, Pop-rock, this kid does it ALL.

I really wish it had a clean

Baaahah - this man is a legend

DoNotDownloadThisApp567878 - A star is fckn born

I love his album it’s insane not one bad song

The album without savage was the best mixtape EVER! But with savage. Oh hell yeah! Best album to ever be released in the MULTIVERSE! IN THE PAST AND FUTURE! IF YOU DONT LIKE THIS GUY YOU HAVE A BAD TASTE IN MUSIC AND MAY AS WELL NOT LISTEN TO MUSIC AT ALL!

Yep, just as I thought...three seconds into the first sneak preview and I’m like ....’just as I thought, nowt new, nowt original, just another fool spitting attitude’....generic garbage!

windmill1395 - I blame the parents

My mum used to wash my mouth out with soap whenever I swore. You have to ask, what happened here?

Savage Love and the way he sang that F🌸CK so sweetly .

Kid Laroi is the truth .

What do you think F*CK LOVE (SAVAGE) album? Can you share your thoughts and listen experiences with other peoples? 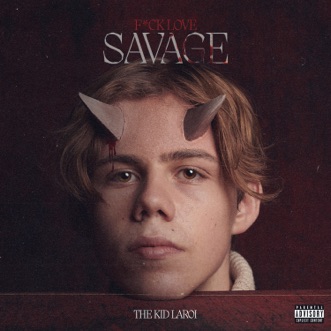