I randomly heard cotton candy and instantly fell in love with Dom and his craft. He writes amazing lyrics that sound like they are pouring out from his being. He’s so different.

Album of the year.

matt x3 - ALBUM OF THE YEAR

He is growing and so is his music. There are some people in this world that may not like it but it’s probably one of his best. There is not a single song I don’t like, every song has a story to tell. We are here together. We are the FREAK SHOW!

Was so impressed with their first album. Not a single good song on this one.

This dude is “weird!” he gained attention with features with Halsey and MGK. He’s not good though.

Loads of people experience cognitive dissonance when it comes to YB and only rate this bad because they are stuck on genera... lol YB has no genera. This music is for people who understand music and don’t just listen to the radio too 100. This is raw talent that need attention from the listener. This kind of music flies over (simple) peoples heads because it’s not cookie cutter. Some people get mad when they don’t consistently collab with another artist or they are mad that the next album doesn’t sound like the first. Don’t hate it just because you don’t understand it 🤘🏼

ALBUM OF THE YEAR

Vastayan Wolf - loved it from start to finish!

Dom keeps at it with being so down to earth and catchy. This album rocks

This is so amazing and the songs are so incredibly reliable.

I was disappointed with Shawn Mendes’s new album, Wonder, but weird! made up for that. YUNGBLUD is straight up here saving 2020 🖤🖤🖤

dookieboy69 - This is awfully boring

Dom i am SO proud of you!!!! This is such a great album and i haven’t even heard it all yet!!

Literally so good. The messages behind the songs and the overall composition of the songs, make this top tier and definitely my favorite album of 2020🖤🖤🖤🖤🖤

Dom, this album is a masterpiece. Thank you.

Keep making music like this!!! You make me feel like I’m not alone!! Don’t listen to the hate, your amazing and I mean it!!!😊

Indeed, there is life on Mars. This is up there with After Hours as best albums of the year imo.

This music is everything.

Totally amazing! Worth it!

I cried because this was beautiful. Yungblud has helped me through so much and this album means the world to me

Ok , I live in the middle of nowhere in West Texas . I’m 50 F-ing miles from my mail box , pretty dang isolated. I stumbled across this album/ songs while on YouTube and love them all . I had to make a trip to town and first thing was to get iTunes to buy this album .Your personality from some of the interviews won me over . You seem like a fun guy . Keep up the good work .

This album is everything we’ve been waiting for and more. From Teresa to freak show, dom had us (bhc) in mind. Thank you to the entire Yungblud team for this album. Also ice cream man.... FOOKIN INSANEEE! 🖤🖤(@nicole.yunick)

Where is Halsey??! You’re only in my recommendations because of your collab with her in 11 minutes -.-

It’s emotionally charged, and fantastically upbeat! Every song is different from the last, but it works so well! This is my favorite album of 2020! 🖤🧷🖤

Such a perfect album

This year just keeps getting worse🤮

This album is incredible. Relatable but so full of heart.

Every track is perfect. Teresa is my fav.

WE ARE ALL FOOKIN WEIRD!!! BUY THIS ALBUM

The songs themselves are good. The singles Cotton Candy, Strawberry Lipstick, and Mars are classics. Dom has himself doing his own thing within his own genre and that’s respectable. That being said, the album as a whole is very inconsistent at times. It’s very weird to listen to front to back (no pun intended). The songs does not flow very well together, and songs will alternate between slower somber songs, and songs with more energy. This might have been done on purpose to break the album up a bit, but it does not work. If the album had shorter interludes between some of the songs, and the songs flowed into each other a bit more, it would be a lot better. Nevertheless, I like this album. There’s some good stuff in here. But there’s lots of places the album itself could’ve used some rearranging.

YUNGBLUD AT IT AGAAIINNNNNNNNNNNNN WITH THIS BOP OF AN ALBUM. Continues to blow my mind everyday with his music 🤟🏻xoxo Dom STREAM WEIRD!

It’s not even out yet and I know how good it’s gonna be 😭🖤🖤November 13th is gonna be the best day all year!!!

Not correct genre. Go with MGK in the rap category where you belong

Everything ab this album is perfect I love this man to death. This album is just what I needed rn🖤

As I 52 year old metal head I stumbled upon this track and I love it! The sound, the energy, it gives me hope for the future of music. This young man is talented. Little alternative, a little punk rock, all rock and roll and all attitude.

Better and better with each album. 🖤

hryciw44 - A masterpiece of epic proportions

Yungblud is the best love this album 5 stars from me

Best YUNGBLUD album yet, been a fan for a while and been waiting for a long time and it was better then I could of imagined. Best songs are Teresa, Charity, and The Freak Show. I listen to it non stop and love it so much. Five stars.

A brilliant album written by a brilliant artist I love every song on it.

This is some of the worst music to come out this year.

See above. This kid is not unique in this derision, total try hard with a contrived appearance to appear edgy. This noise is mostly sanitised/identikit with no real purpose or direction with the odd line intended to induce shock thrown in for good measure....the team of songwriters assembled to work on his behalf are dismal. If this is a supposed antidote to pop I am left chuckling lolol.

phenomenal album. deserves all the love 🖤

I can’t believe some of the 1 star reviews of this album. Some serious haters out there, jealous of an individual who can actually be himself and make the music he wants. Get a grip. This album is a real step up from 21st Century Liability, a maturity across a variety of genres and with influences from all over the spectrum and world. Keep doing what you’re doing Dom, you’re making the North proud.

Madihillxx - ALBUM OF THE YEAR

An album that makes you feel something with every song. intensely beautiful.

dom and everyone involved in the making of this album have blown so many of us away, we’re proud of all of you for the hard work and effort gone into all of this wonderful masterpiece, i loved every second of listening to it and can tell it’s going to be a staple in my library that stands out everytime!

I simply have no words, by far Dom’s best album yet. This album is gonna slap HARD live when we can finally get to gigs again🖤 #WeAreWeird 🖤📎

incredible incredible singer, adore this album. his authenticity is gorgeous

CharlieBieber5Mahone - BEST ALBUM THERE IS!

Music is my life and I have ALOT of albums aha but I’ve never ever connected to a full album, like I have with this one. This ones special. It’s all about life. And I think if u see this u NEED to give it a listen and buy it, u WONT REGRET IT🖤🧷

Awful music if you can call it that.

I personally think Dom is amazing he has changed me and if it wasent for him i would be having meltdowns all the time and I’m stronger now THANK YOU DOM this album is amazing and on a whole YUNGBLUD music has made me. I’m so thankful xx

If I could give more stars I would. Dom makes this music for all of us struggling souls. His music makes us feel alive and true. This album is everything to his fans! & negative comments are just a matter of opinion - doesn’t make it true. If you have nothing nice to say then don’t say it at all.

Come on Dom it’s already amazing I love you so much your doing great with your music. 💓💓

@FoxDidItAgain You don’t say weird shit in this app.

@MadameCooki I’m goofing. He is weird though. I’m trying to be as open and welcoming as possible for once but I may have been a little too nice..

QUIT TXTING ME ASKING IF I SAW THE NEWS. I EAT SLEEP AND BREATHE TWITTER. BASEBALL IS WEIRD LETS SEE IF IF WORKS OUT..

Please someone explain to me why you idolize someone’s fucking manager. this is weird and i’m concerned.

In The Naughty Corner

@FattestDolphin @Fajji_Hanji @NotToadMckinley I'm not sure how many 20 year olds you've seen in high school but since you want to use that example, wouldn't it be weird if a middle schooler was dating a senior?.

@KSLcom What a weird title. Those are the idiots. So many Americans need the money..

/ is it weird for someone using the same character to follow you? or is that just me?.

@elfvillage2 That's really weird. I'd delete her from my social media out of respect for my wife/kid. but of course I don't know the full situation. do what your heart tells you is right, King..

What do you think Weird! album? Can you share your thoughts and listen experiences with other peoples?

Weird! is the second studio album by English singer Yungblud, released on 4 December 2020 by Locomotion and Interscope Records. Originally scheduled for 13 November 2020, the album's release was delayed due to the COVID-19 pandemic. It is Yungblud's first album since 21st Century Liability (2018). The album was supported by six singles: "Weird!", "Strawberry Lipstick", "God Save Me, but Don't Drown Me Out", "Cotton Candy", "Mars" and "Acting Like That", and contains collaborations with Machine Gun Kelly and Travis Barker. The album topped the UK album chart selling 39,000 units in its first week.. 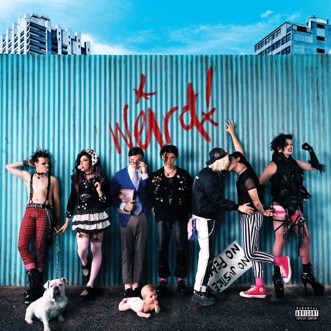