dunn_nicholas - Washed Up on a Shore

If you want an album that you can put on and just ignore... then this is the one for you! I was excited to hear that the Fleet Foxes were releasing a surprise new album, but it was clear from the first few tracks, that this was going to be in a similar vein as "Crack-Up," in that it's an album that has some interesting changes and effects, but effects do not make a good record. The record often plays as if Robin Pecknold had some ideas for songs and then decided to take them nowhere... the first 7 tracks play as if it was a requiem... just a drony string of nothing that leaves the listener with an ambient feeling. Then there's the lyrics, that don't really say much and are often drowned out by over-production. For me, the album didn't even get interesting until you get to "Maestranza" and "Young Man's Game," because you can finally hear a hook every now and then and make out what Robin is singing... but sadly, I'm not going to be picking up this record to listen to these tracks any time soon. So, in the end, this record is ultimately forgettable... if I had to listen to this in concert, I'd probably fall asleep or get up and leave. Void of a heart and soul, "Washed up on a Shore."

First 10 songs are great, last 5 not so much. Batting .666, not many records pull that off. However, this band has a way with time, songs that didn't move me early on a listen tend to grab me later. I won't give up on them.

Having been up to now barely a semi-fan I find this new album gorgeous with a clarity and energy their earlier works lacked. Yay Seattle bands!

FF have always tried to compete with the like of My Morning Jacket and Band of Horses but never quite rose to the challenge. Ragged Wood and Mykanos are the 2 hit wonders they did, everything else is poop.

Loving the calm cleanliness of this album. It’s been really good to listen to while I walk.

Such a beautiful album. Every song is a jem.

I only discovered Fleet Foxes about a year and half ago (hat's off to lead singer of Greta Van Fleet Josh for that tip). I immediately fell in love with their sound - the instrumentation and vocals and other-wordly but solidy cool sound hooked me in from the start. I immediately bought all their albums including Crack Up. I have waited patiently for most of this year for their new album (hey - during Corona time what else I have got to) and I am not disappointed. This is a stellar album both similar and different to their previous work. The lead singer's voice is angelic and perfect for the songs. It is almost a solid hour of terrific music - a soothing balm in these challenging times. Buy it, listen to it, and love it...over and over again...

A soundtrack to escape into. Refreshing, powerful music. So far, I prefer the first half of the album, but can see other tracks growing on me with repeat listens.

Michael DeMartin - Album of the Year

This is a stunningly beautiful album of great songs, perfectly sung and arranged. Hopeful music needed for these times.

A true work of art, an absolute masterpiece. Robin showing once again that there are levels to this. There may be many great painters, but few Rembrandt’s, Picasso’s, or Van Gogh’s. Fleet Foxes are one of the few, and they’ve created a true work of art with Shore, a perfect follow up to Crack-Up, both in spirit and in content.

Shore is a fantastic album

I was so excited for a new album. The songs are just blah. They are almost Cold Play like

If you want to escape into a dreamy, meditative state and not think about all of the negative going on in the world today - listen to this album. There are tracks that’ll make you feel upbeat, then there are tracks that you can’t help but unwind to when listening. This album is wonderful from start to finish and is the perfect soundtrack to a crisp autumn day or cozy evening in. Thank you Fleet Foxes!! Going to be listening to this A LOT!

Robin Pecknold comes out with a beautiful body of music that everybody needs right now. It’s like a musical dream simply put. The music and lyrics are well thought out and produced.

Heal Each Other, and Heal Yourself

Harmonizing at its finest

An uplifting yet mellow vibe! In other words it’s perfect Indie! I heard 30 seconds of one preview and purchased the album. Read the iTunes review it’s has a complete artist explanation of each song. This adds value to listening!

Perfect album for the times. Fleet Foxes are such a great band and find a way into your heart and soul with their layered sound of beautiful sound scapes. Thank you!!

This one's gonna be a grower for me. It seem's promising though. It seems complex. After a couple listens through so far, the one that stands out to me is A Long Way Past The Past, which seems like a nice driving song, majestic and flowing. (a sound the whole album seems have)

These guys have true talent for their genre of music. I am someone who pays deep attention to music and I love how they include many sounds (loud and quiet) in their tracks. Well done as usual.

Andy Cyphert - They’re back at just the right time.

They’re back releasing music at the greatest time of year. The onset of fall. It could not be more appropriate or meaningful.

I never thought they Helplessness Blues could be topped...but Shore may just be their best work to date.

I utterly adored Crack-Up and didn’t think Pecknold could ever top it, but somehow, he has. What a gift of light and warmth in a dark year. Thanks, Fleet Foxes.

I didn’t think Fleet Foxes could top themselves but they did it again.

What do you think Shore album? Can you share your thoughts and listen experiences with other peoples?

A shore or a shoreline is the fringe of land at the edge of a large body of water, such as an ocean, sea, or lake. In physical oceanography, a shore is the wider fringe that is geologically modified by the action of the body of water past and present, while the beach is at the edge of the shore, representing the intertidal zone where there is one. In contrast to a coast, a shore can border any body of water, while the coast must border an ocean; in that sense a coast is a type of shore; however, coast often refers to an area far wider than the shore, often stretching miles into the interior. Shores are influenced by the topography of the surrounding landscape, as well as by water induced erosion, such as waves. The geological composition of rock and soil dictates the type of shore which is created.. 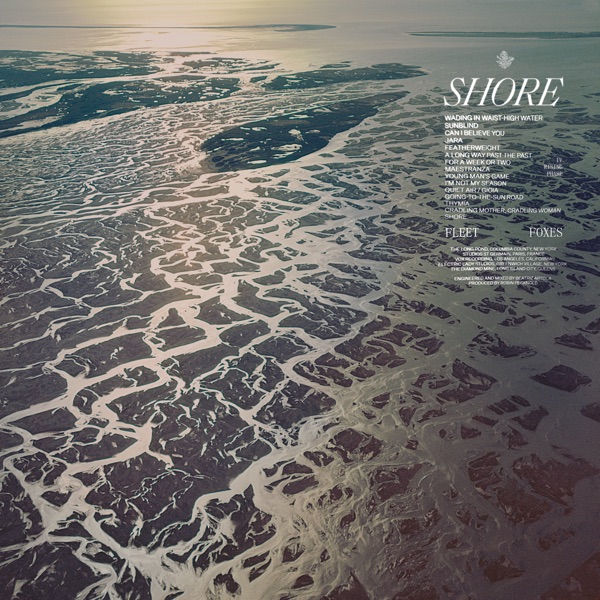