Tickets To My Downfall by Machine Gun Kelly Album Reviews

All 90s kids and teens would be loving this! Throws back to the blink days and just has that pump up vibe MGK is so good at, TB kills it as usual the guy has the golden touch I swear...

Pain and failure are great for an artist. I think mgk was on easy street for a while, then eminem ruined his career for a while. Honestly im surprised, this music isnt so bad. Its definitely not for everybody, but i know lots of people that love that simple punk blink 182 style. Maybe mgk has finally become his own person.

Love pretty much every song so much

listen if you enjoy the sweet sound of baboons making love

Absolutely Amazing Lyrics and an even better sound to match! Love MGK xo

Mgk is absolutely killing it, y’all. Boo, myself and Uncle Tom are super keen for his album to drop x

I think this is the best album he’svput out since, Bloom💯 like there’s some really deep motion songs on the album then there’s absolute hard-core songs in the album, which is what people have always wanted!! 🎸 can’t stop listening to it on my Bluetooth speaker, guarantee he’ll get a #N1 album!! 🥇

Everyone needs to listen to this album! ❤️🔥🔥🔥 I love this genre and hope MGK does another album like this.

Im an MGK fan but, this is repetitive music with some irrelevant trash in between. the best of this was released pre the album. I grew up with Blink182, this is a cheap knock off at best.

Such a great album! Love every song!!

Sretana - MGK providing us the bops once again

This rock phase NEEDS to stay 🔥

Not a big fan of his rap but love MGK ability to switch genres. Big fan of pop punk & love this throwback to the 90-00s. 💚☠️

campbo3 - The best yet from MGK

This album is killer! Every song is a banger. Already can’t wait for the next album

Bringing Pop Punk back to mainstream

Album of the decade

Rociocartes - So far, so good!

This gives me soooooo many 90’s American Pie feels. I’m so excited for the whole album. 😩 MGK can do no wrong.

After listening to the Hotel Diablo I hoped for something similar and equally fresh. I can’t listen to one of these tracks all the way through this is so far away in terms of style from the last 2 albums.

I’m wasn’t even a fan of this genre of music until now. I rate nearly every song on this album.

Well I only discovered MGK through his song on Tony Hawks pro skater remastered. His track “bloody valentine”. And thought, this is pretty good. Wonder what other songs this guys got. Honestly, his older albums not great/not my taste. The album before this was good though. Then I heard this album. Completely awesome! I needed some punk music! I’v been listening too much of “simple creatures”. The only thing I’d say is the songs are quite short. Being roughly under 3mins. Anyway, I hope this guy makes another album like this, as it suits him more than the ‘rap game’. And hope the songs will be longer on the next album 🤞🏻

instant classic, best pop punk album for a while

Tays😎 - Pop punk at some of its best

Each song is catchy and energetic, exactly what pop punk should be. The only real problem here is a couple of the songs are relatively repetitive and maybe some of the lyrics. Other than that, still a fun ride and definitely worth a listen 🤟🏻

the gordon ramsay of games - Amazing

This album has so many songs that slam, could do with longer tracks, but still nevertheless can listen from start to finish and not skip 100 per cent!

This album has a song for every mood and takes you to a better place! 10/10

An album just for teeny-boppers into blink182 style pop-rock. What absolute rubbish, maybe in the 90’s this crap would fly.

This album is pure fire. 🔥Kel really went for it with this album and it shows. I feel like I’m back to early 2000’s pop rock /punk era and I love the vibe. This is true (rare) quality music. Totally worth it 💯

Massive fan of the album, the pop punk sound he’s brought in to this really suits him ans his overall look! Plus anything Travis Barker is involved with is usually fire! And this doesn’t disappoint!! 100000% recommend!

Seshdoll - His best work yet

This album is a masterpiece every song is great, it’s really cool that he’s experimenting with different sounds aswell.

If you’re looking for pop punk with heart this is the album for you. Stand out songs are Lonely, Title Track and Forget Me Too!

Always doing something different, the musician/artist we always needed, someone who can do variety!

I bought this as soon as I woke up, and rocked out to it as I got ready for school. You can never tire of this music, especially nothing inside and forget me, those are the best❤️🖤❤️🖤

every single song on this album is fire it’s honestly so good it’s on repeat all the time!! 💗

ElanaMarieXX - Tickets To My Downfall

Sit back, light up a J and play this through speakers, extra loud. You’ll thank me later, I promise you!

CAFTW - Tickets for my downfall

Been a fan of MGK since general admission but growing up as a pop punk kid through the 90’s and 2000’s this album puts such a smile on my face. And to all the people moaning he’s being a “blink 182 wannabe”. I believe it holds that sound due to travis’ drumming. There are hundreds of bands still making this kind of music and hopefully from people hearing this album it will encourage many more!

Was so excited for this album but it’s actually a disappointment, 15 songs but only 3 of these being 3+ minutes?? 2 interludes and a 1 min song are pointless as well

To all the people crying over the Eminem beef giving the album 1 star... grow up, to the people saying he’s a blink 182 wanna be... if you are a true blink fan you will know that Travis barker and him are tight and he helped produce this album and features throughout... he isn’t a blink wanna be, he knows that pop punk was at the peak when blink and green day were on top so he has adapted to she sound of them and got the help of a member of blink... honestly if you like old school blink and green day, he has put a lot of effort into giving it that vibe, and to the one comment saying ‘it’s been done before’ most music these days has been done or sounds similar... enjoy the music and appreciate the lengths this man has gone from to evolve his rap into a solid pop punk album that I’m sure will do extremely well... Well done MGK and Travis.

Absolute banger of an Album🔥🔥

I was expecting a punk pop album, and we got it. But I also got the tears and laughs that we have had with previous albums too. He truly makes his work his own with the interludes and comedy pauses. Completely blown away. King of 2020 that’s for sure. I can’t fault it. Yet another no skip album.

Epic gwyn - ALBUM OF THE YEAR

BEST ALBUM EVER! LOVE EVERY SINGLE SONG! I laughed, cried and raged! So proud of you Colson, came so far! EST4LIFE

incredible album from start to finish, it flows so well into one another, the hotel diablo references and every interlude and every song is just art. thank you for being so raw. EST4LIFE

Definitely MGK is a complete artist. I’m not used to pop-rock/punk music but I can’t say that it’s a bad album if I shake my head on each song. If you like Bloody Valentine and/or My ex’s best friend you should listen this album!

Can’t fault this album one bit 🙌🎸🔥

MGK has reinvented himself as a legend

This is exactly what was promised by MGK and Travis!!!!!! Worth the wait for the album release

I love Travis Barker and anything he does, if MGK is involved? Even better! Take my money!

Jaygallant01 - Such a great album

Machinegunkelly honestly out did himself ! I listen to the album 24/7

all the people saying “this sounds like 2000’s pop punk like blink 182”. that is the point. travis barker is literally drumming on the damn thing

Ignore the fools saying it sounds like (insert punk rock band name) all music sounds like other band from the genre. Refreshing style with the current music trends! Innovation happens when you zig while others zag

GunnerMCFC - BUY TICKETS TO MY DOWNFALL

Incredibly excited to hear the rest of the album! 🔥

Sounds dated. Like early 2000s pop punk but nothing original. Lyrics are weak and the sound has been done. Inspired me to listen to Blink 182 and Sum 41 though.

@bestalbumswrld: TICKETS TO MY DOWNFALL by machine gun kelly

@wallowsrigo: you’re telling me it’s been ONE MONTH since we got tickets to my downfall. wtf. @machinegunkelly how does it feel having d…

free tickets to my downfall

tickets to my downfall 💗💀

@machinegunkelly dreamed that i was on a tickets to my downfall tour at brazil, please follow my dream, xx

What do you think Tickets To My Downfall album? Can you share your thoughts and listen experiences with other peoples?

Tickets to My Downfall is the fifth studio album by American musician Machine Gun Kelly. A departure from his established rap sound, the album is a more guitar-driven pop punk album. It was released through Bad Boy and Interscope Records on September 25, 2020.. 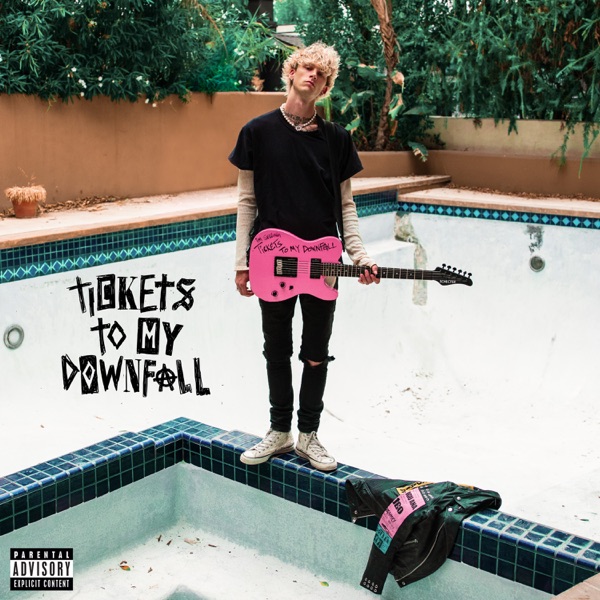 Tickets To My Downfall Album Credits

Tickets To My Downfall Similar Albums