Use My Voice - Single by Evanescence Album Reviews

Strongest vocal, and songwriting performance, in history of band. I hope they do a stripped down version as the beginning is so hypnotic.

Not really good. I have written better

So far so good

I have never been more proud to call Evanescence my favorite band.

Politically inspired music is NOT what we need

Wow, all the amazing musicians involved, the lyrics and verses, what a year for Eve! The Bitter Truth is gonna be one stellar album!

This song is so powerful and well put together! The different voices in the choir and the message are just.... Well done Evanescence! I’m amazed!

That Nostalgic feeling of listening to The Open Door is back!

I must say Evanescence has always had an impact in my life from the beginning of their mainstream media debut and I’m so happy that yet again they have redefined their sound and this album sounds different. Like more soul and experimenting. Great job!!

I heard this song on the same radio station that plays other songs I listen to. I used to be really shy until I heard this song and then it inspired me to use my voice, talk back, and be strong. Thanks for a song that is a good influence on shy girls. For the noobs who think this is politics, shut up Love, Me

Amy Lee inspired me to be a writer almost 15 years ago. Soo happy they are releasing more music. Song is straight up 🔥🔥🔥

As a long time (17 years) fan of Evanescence just have to say how proud I am of these individuals that love their fans so much they have been busting butt even under quarantine so they can provide amazing art that is music! For most it’s such an amazing therapy. These members have felt how everyone has felt and the lyrics just wow! I’m excited for their future.

Can’t wait for the new album

Awesome anthem. So glad that evanescence is making music again!!!!

The sound is so off-putting. The instruments lack the classical pieces. The lyrics are spat out rather than crooned. I get she is angry, but she can see angrily based off past efforts. My first thought is this song is addressing the time the band replaced Amy w a sound-alike from a music talent show. But this is a feminist anthem? Seriously? So out of touch. Taylor Swift is not someone to aim to be like.p, especially when you are Amy Lee. Keep the politics out of it and sing beautifully from your heart—and rehire the classical instrument band members. What cacophony.

A beautifully written and sung song with a great message, love the sound of their new music.

Beautiful powerful voice that echoes through your soul.

Powerful. I made this the first song on my playlist.

OhSoAwesomeSauce - Now this is Evanescence!

This is the best song they’ve released in a while!

Powerful. I made this the first song on my playlist.

The worst song Evanescence has written in her career. I have been a fan from the beginning, but her creativity is slacking. Not sure if it's her inner circle or what, but I hope someday she get's the writing skills back that placed her on the map.

I seriously don’t know what everyone is talking about this song is so good.

idk... so far i’m not all that impressed with any of their new songs 😔

What happened to them? This is he 3rd song where the chorus lyrics are amateur at best and the recoding is a GarageBand mess. This producer NEEDS TO GO. More and more people are getting tired of the lackluster music they have been making. This is just bland, uninspired, and generic overshadowing the important message the song is trying to get across.They have become so disappointing starting with the self titled. They keep going back to this generic sound and producer who mixes out the intricacies and doesn't seem to push them to evolve. Stings? Experimental vocals? Interesting sounds? Clean mixing? Unexpected guitars? Matured lyrics? None of it is part of the band anymore. If it wasn't an anthem for girl power and voting it would not be as well supported. So much more could have been done with those wonderful messages. Like the sefltitled this will not be remembered long term and wont keep popping up on charts like previous works. No one expects/wants the same album twice but the same quality and effort should be apparent.

TheLadyAmalthia - How is this Evanescence?

I’ve been listening to Ev for 17 or 18 years now and this new album is awful so far. It just sounds uninspired and generic. Really disappointing.

@Momoreoluwaa @JrAnthoony_ Lmaoo Wahala for we wey worwor Abeg make una no Air me Abeg Them don use oxygen wan kee me Just retweet my new single or help me stream if u are bored abeg My voice no too worwor abeg .

That many people go through this every single day, not just black people but all minority groups. I’ve learned that I need and can use my voice to help create change in the community and that’s all I want. I want a world where race, gender, sex, sexual orientation, and -.

@Xhristalets ppl asking for dl7 when i use my voice for more important matters noseq😩 siguiente tueto muy new single this is usa out friday ❤️💙❤️.

I plan to use Twitter as a platform to voice out my personal opinion, hoping to be noticed one day as I believe a single person’s voice can change a room..

I haven't posted a SINGLE picture of my fursona today this is not time for clout chasing just use your damn voice.

I have a practically non-existent voice platform on this site, but I will lend my single-number elevation of tweets and news that needs seeing, I will spread threads of resources, and I will throw what little money I have to those that can make better use of it..

Everything single video I had planned this week involved the use of my voice which yah know is cold ridden so hahaaaa idk what to film.

@dylanobrien not from georgia (IL bb here) but when i did vote i was able to get my republican family to vote blue (on almost every single ballot section) for the first time & got a friend to vote for the first time & use his voice :) felt accomplished & worked drop off ballots for my town!.

@Aetna Highlight my strengths? I have a voice and will use it and let people know what a scam healthcare is in this country. I will also support a single payer system which our next President said he wants to implement.

@NyanSugar I have not a single doubt in my heart that you really make the world a much better place for us all, because you are strong as fuck. When you use your voice, your wit and your massive talent, you don't just give people laughs, you also inspire a real sense of comradery..

What do you think Use My Voice - Single album? Can you share your thoughts and listen experiences with other peoples? 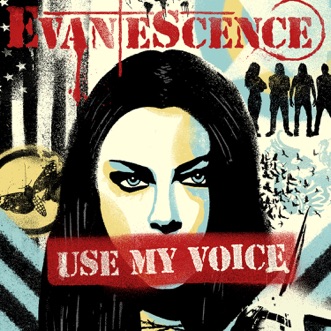 Use My Voice - Single Album Credits

Use My Voice - Single Similar Albums