Music To Be Murdered By [Eminem] Album Songs

Do you love Music To Be Murdered By album? Please share your friends!
Download Album Now! Buy Album Now!

Music To Be Murdered By by Eminem Album Reviews

White_Mamba_4 - Unanimous MVP! What an album from the GOAT!

This is an absolute favourite! Best album in 2020 for me.

Linds80MA - One of his best ever

Eminem gets better and better! You gon’ Learn and I will are two of the best songs on here! The entire album is amazing!

Blankman009 - What I Expected “GREATNESSES”

After Rival failed, I knew Em was gonna comeback Strong & he didn’t disappoint. Back to BACK Dope Albums Kamikaze & MTBMB. I didn’t even listen to samples of either Album, I just bought both of them!

DenzelCurryTakesAnLEveryDay - At least it was better than lil wayne's album

I mean I don't even care about this album but at least it was better than the funeral album by lil trashy a*s wayne which was released at the same time.

Amazing!!!! Kamikaze and now this, thank you Eminem!!!

One of my all time favorite albums

2pac the realist - Still no one close to him

I laugh when I read these negative reviews because these people aren't intelligent enough to understand him. As for people saying he isn't as good as he was when he is younger make me laugh because he is so much better now.

BlazerzXD - Godzilla the only good track

Title says it all

Oh no I didn't - Reading review and laughing

All these haters. It’s one of two things. They either hate him because of the Trump diss years ago, or they want to be edgy and have to be different. No one really cares but it’s funny to read. I digress. Another amazing entry by Em. Not like the old but if you’re into multi-syllable, multi-entendre, multi-cadence and metaphorically amazing wordplay, this is it. You’ll like this.

Em is the rap God we all know and love. In this album, he throws some unexpected beats n jams into the mix that only make us love him more. ANOTHER A++++ for MARSHALL MATHERS!!!! ❤️

EVERYONE IS A HATER OF SOMEONE - Yo

Ragz29 - I grew up on Marshall

What can I say, I’m part of the generation who grew up on Marshall Mathers - EMINEM! He is without a doubt the best rapper out there. The new young guys coming up are trash. They make garbage music and have 0 respect for the ones who came before; Like Run DMC, Ice Cube & Eazy-E. Hearing and being part of Marshall’s Journey to find himself and his voice has truly been a Ragz to Richezz story that will be told throughout the ages. This album, Following up Kamikaze, and before that, “Revival”, shows exactly that; growth. When your that age (my age), and your still spitting and putting out Fire like in 2000, Means Marshall isn’t just some “hot song” of the moment. He is the definitive poster boy for longevity and survival in the rap game and music industry. His music has inspired myself, as well as millions across the globe! Don’t ever stop, Em! [email protected] em’ all Marshall!!!

This album in my eyes was better than his last album “Kamikaze”. The features were solid, and his rapping and lyrical ability never fails to impress.

Super Puff Productions - Just got back from being murdered....again

Shady is just doing his thing on this album! His lyrical mindset is truly so one of a kind. Oh, and of course we all know (hopefully) about Godzilla.....

Em been coming strong since Revival. Kamikaze was fire and MTBMB is just as strong if not better.

Awesome . Eminem is on next level

What rap sounds like. Mixed beats. No mumble. Made his point.

I love this album so much. Everybody who says Eminem is trash or is no good anymore does NOT know what they are talking about. I highly recommend purchasing this album along with all of his other albums. I will always be a true Eminem Stan. Eminem is the goat of music and is fire 🔥🔥🔥!

The songs are awesome

Eminem still has it! This album is amazing

this so good, godzilla is fire rip juice :(

OG brings his amazing style tp the new era of hard bass and deep knock. Can't wait to bump this is my JBL Partybox 1000z

Killller album! Been months and I still listen daily! You did it again as usual, Em!

The king has returned people

Lies! Em Sounds a little weaker in this new album. Doesn’t quite reach higher levels like the previous albums. It’s still good though.

This album gave me chills. The beats, the lyrics. The meaning behind these songs. Beautiful and the best yet.

This album is so good. 🔥 Em keeps getting better with lyrics and beats. 100% Recommend

True Eminem style. all of the tracks are good great album a must have

He's still got it! Possibly better than before. Many tracks left me speechless, jaw-dropped mid-song thinking, "How can he still be this good and spit lyrics so incredibly quickly?!?! WOW!!!!!!!!!!!" I did not buy this when I first heard it came out, but now that I got the opportunity, I am ecstatic. This is unbelievable. Just...wow. I've grown up with Mr. Mathers since his first album. I am amazed. He is awesome and needs to release albums every year. As a bonus, nineteensih tracks for $7.00. Thank you, Marshall. Incredible.

Super solid album ! Tracks aren’t too long & very much to the point. Not so aggressive, great balance of Marshall mindset with Shady energy! Eminem remains the GOAT

Legendary bars from the GOAT

and this album proves it

This man is the goat

this is a good album. my fave is godzilla, ABSOLUTE BEST. ❤️ these are good songs if i do say so myself. good album!!✌🏼❤️♥️💖

@JajaPhD: If Buhari claims to be unaware of the murders committed by @HQNigerianArmy, then he must sack Buratai. He must also resign sin…

Music to be Murdered by cont. This is my most listened to album this year and I think it is one of the better proje…

Eminem - Music To Be Murdered By Album Comments

What do you think Music To Be Murdered By album? Can you share your thoughts and listen experiences with other peoples?

Eminem - Music To Be Murdered By Album Wiki

Music to Be Murdered By (stylized as MUSIC TO BE MURDERƎD BY) is the eleventh studio album by American rapper Eminem. It was released on January 17, 2020, by Aftermath Entertainment, Interscope Records and Shady Records. It was released with no prior announcement, in a similar fashion to his previous studio album Kamikaze (2018). The album was produced by Eminem and Dr. Dre, amongst other producers. It features guest appearances from Young M.A, Royce da 5'9", White Gold, Ed Sheeran, the late Juice Wrld, Skylar Grey, Black Thought, Q-Tip, Denaun, Anderson .Paak, Don Toliver, Kxng Crooked and Joell Ortiz. The album is dedicated to the late Juice WRLD and Eminem's late bodyguard CeeAaqil Barnes. The album's title, cover art and concept are inspired by Alfred Hitchcock and Jeff Alexander's 1958 spoken word album Alfred Hitchcock Presents Music to Be Murdered By. The album was supported by two singles: "Darkness" and "Godzilla". Alongside the album's surprise release, Eminem also released the music video for "Darkness", which revolves around the 2017 Las Vegas shooting from the point of view of the perpetrator Stephen Paddock alternating with Eminem's own. The album debuted at number one on the Billboard 200, selling 279,000 album-equivalent units in its first week. Subsequently, Eminem became the first artist to have ten consecutive albums debut at number one in the US and one of six artists to have released at least ten US number-one albums. Music critics praised Eminem's lyrical abilities and the improved production after Kamikaze, while criticism directed towards the album's formulaic song structure, lack of innovation and shock value.The Mayor of Manchester, Andy Burnham, responded to Eminem making light of the 2017 Manchester Arena bombing, saying, "This is unnecessarily hurtful and deeply disrespectful to the families and all those affected." The criticism of the album's subject matter led to Eminem responding in an open letter, saying that Music to Be Murdered By is "not for the squeamish" and is "designed to shock the conscience." . 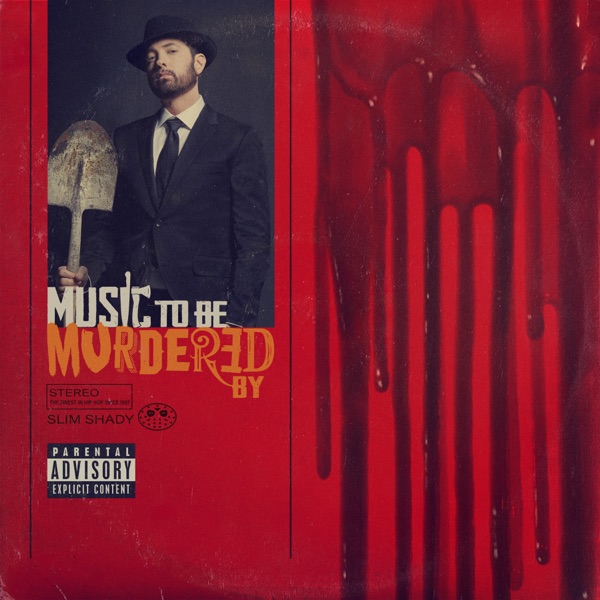 Music To Be Murdered By Album Credits

Music To Be Murdered By Similar Albums