This is one of Thomas Newman’s greatest works but, we’re is wayfaring stranger?

Thomas Newman has outdone himself. What a stunning score. It carries so much of the weight of the film, and does it flawlessly. I left the theater knowing this would now be one of the most affecting film scores I’ve heard, and one of my favorites. Well done.

Let’s listen to some GeHanna

I’ve been a fan of Thomas Newman’s compositions for years. His music is some of the most hauntingly beautiful in cinema. I find it difficult to explain how his score(s) possess the ability to move people in a way I thought not possible. With his newest soundtrack getting an Academy Award nomination, he now has been nominated an incredible 15 times. I hope he wins this year at the Oscars, he undoubtedly deserves it. Favorite tracks: The Night Window. Sixteen Hundred Men. Come Back To Us.

sonthalli - WHERE IS WAYFARING STRANGER????

Where is wayfaring stranger and how do I find the version in the movie and can that singer record an album PLEASE!

Waffleman95 - NO WAYFARING STRANGER, complaining till we get it.

I will buy anything Thomas Newman, but the people want Jos Slovick singing Wayfaring Stranger. It was a beautifully haunting scene in the movie when he sung it and this album is incomplete without it. I won’t give spoilers, but the song is the movie’s lynch pin and not having it here is like not having whip cream on pumpkin pie.

the score is hauntingly beautiful..and the the young soldier's acapella rendition of 'wayfaring stranger" is the fulcrum on which it is balanced. That song is the reason i came to itunes to download. I have many versions of the song..but none as haunting and pure as that one. i hope it becomes available soon! i cannot give more stars until i have wayfaring stranger.

Amazing movie and an amazing soundtrack!

I read that the person who sung the version of Wayfaring Stranger that’s in the film recorded 3 verses of the song. I would pay $1.29 for the song no matter the length of the recording and I’m sure a lot of other people would to. Please release a official copy of it the whole song would be even better but I’d just be happy with 3 verses of the song.

LadyGranada - Where is Wayfaring Stranger?!?!

Such a beautiful version of that song. Too bad it didn’t get added ☹️

Where’s Wayfaring stranger that played in the trailer?

Scorehound - Perfectly fitting score for a near perfect movie

The score for 1917 is devoid of any John Williams style fanfares or rousing patriotic battle music. There are no hero themes for the British protagonists or insidiously sounding motifs for the Germans. What the score is, however is perfectly written music closely tied to the events on the screen. There are suspenseful notes when the protagonists' fates are in question. There are easy, soft notes for moments of ease and relaxation. There are moments of quick progression and pounding percussion. When listening to the score you have a good sense of what is going on in the film. It's perfectly scored. Thomas Newman hit the nail perfectly on its head here. The score to 1917 reminds me of the perfectly timed nature of Steven Price's Academy Award winning score to "Gravity". It's just pure magic to listen to, and when the album is over you are left with this neverending urge to hit "play" again.

Just read the piece on Mendes and Newman talking about how this track was developed. Amazing challenge

Thomas Newman. One of the best movie composers. This soundtrack is perfectly paired with the movie itself. Amazing.

This and joker have got to be the standout scores of the year. Absolutely amazing!!

The heart tugging solo version Wayfaring Stranger should of been included, wish I could get hold of it somehow.

Wayfaring Stranger version of this song should be on Album.

Absolutely beautiful. My only complaint is they should have put the song, Wayfaring Stranger, sung by actor Joe Slovick in the woodland, onto the album. In the film, it was spine-tinglingly amazing - I could listen to that rendition all evening.

Admittedly as a whole the score for 1917 is not one to sit and listen to repeatedly because a majority of the cues are suited better accompanying the film,but there are certainly some standout tracks on Thomas Newman's score. Gehenna,Englander,Come back to us. are among the best,but there are two cues on here that elevate it to another level entirely. 1600 Men is the cue played when Schofield makes his way along the Trench to deliver the message but there are too many soldiers in the way and he leaves the trench to run along the field. It is quite similar to Hans Zimmer's Journey to the line, with the ticking clock motif. Buy the standout cue is undoubtedly The Night Window, an absolute masterclass in film scoring,it's almost Biblical and is played in it's entireity in the film,it is the most perfect marriage of imagery and sound...

Parcel man - Haunting background noise rather than a score

Although a solid accompaniment to the film, as a stand-alone score it doesn't really hit the mark. There's nothing 'epic' here but it does frame the pictures on the screen very well. The score is a typical Thomas Newman score. There's elements of Skyfall/Spectre and American Beauty coming to the surface so it sounds familiar even on the first listen. It's in the same camp (but far better than) Zimmer's Dunkirk's white noise.

Incredible soundtrack which beautifully scores the best film of 2020!

Thomas my lad, you nailed this. Nailed it! Again a brilliant imagining of a film scored to perfection with typical tears of emotion by the end. Never stop. The world is privileged to have masters like Williams, Zimmer, and Newman.

What do you think 1917 (Original Motion Picture Soundtrack) album? Can you share your thoughts and listen experiences with other peoples? 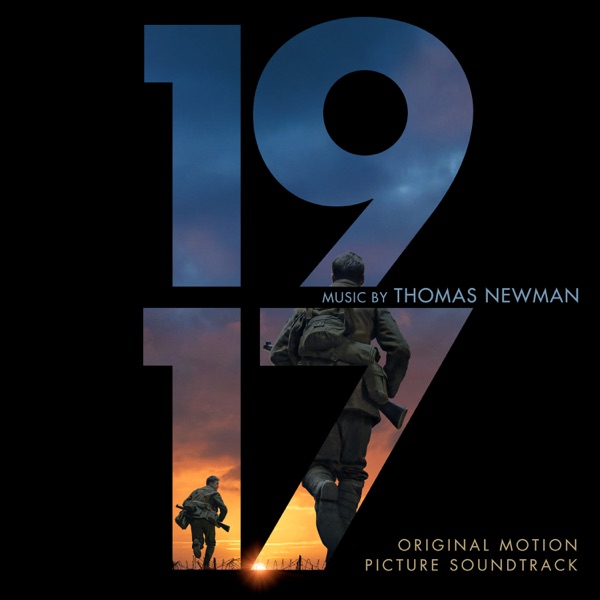