Very amazing. I love it. It’s my favorite songs.

munchkin 7 - Omg into the unknown

I have no children/grandchildren near, but I've watched both movies several times, in sequence. I enjoyed the Frozen 2 best. Great story as we as the music.

into the unknown is pretty good

That is all I have to say.

This is my childhood. #1 and #2 luv them both soo much

I Love Weezer singing Lost In the woods

😮😮😮😁😁😆😃 I Love the m movie 🎥 songs are the best. Just amazed 😎🤩🤩. My Favorite song is into the unknown! Are you better than the original frozen.

I purchased the entire deluxe album and it says it is not available for my region. Disappointing Christmas when my four year old wants to hear this album.

It wasn’t as good as the first one but it still praise worthy. The song are very catchy(have to be careful not to get them stuck in your head lol 😉) clothes are AMAZING!!!! I LOVE YOU OLAF!! Plot could use a little work though tbh.

I absolutely loved frozen 2 and there songs were a hit

houlihon - Hi This is a good movie

Wow India you are extraordinary awesome 😱😍🥰😘😇🤩😻👍🏻💋🎶🎵you are good at singing into the unknown!

I love the music just as much as the movie itself!!!🤩

I love the movie and soundtrack and have already given it a good review I just saw someone said the vulie in the middle of the movie wasn’t there. It actually is. If you listen to the score song indunas scarf (sorry I cannot spell the weird words) it is in the middle of it. Just a helpful tip.😀

I love into the unknown and show yourself these 2 are my favorite songs and every night in February and March I will go up to Erica apartment and watch Chloe closet old rabbit new tricks and listen to into the unknown and watch sailor moon and Pokémon on my phone I love that movie it’s make me so happy and for that I thank you disney for making me the happiest man in the world!!!!!

Wow that last sound track was bad but when this this one came out I thought it was going to be just better and I was so wrong this time it was incredible the best track ever.

noelia ramirez - I love all of the frozen movies

I love all of the frozen movies so much

I LOVE frozen 2 better than the 1st one❤️

Dude. no - So Amazed

I love this album and the music is so much better and more jazzy and fun than the music in the first movie! I love the first movie but this one had great music and I listen to it legit all day. But It gave TONS OF SPOILERS but I forgive them 😊 and you peeps that are like “this is a bunch of girly trash I hate it”... don’t listen! It’s a Disney princess movie! Sorry to disappoint you, but it’s meant for kids. Young girls who want to dream. Like me. If you want to be rude and hate on children’s albums, just think about this: why are you here? Just to brink ppl down and be rude about something you didn’t like? Deal with it! Jesus, just go live your life! Peace out.

Into the unknown IS WAY better than “Let It Go!”

Someone who wants answers - COOL

❄️I loved Frozen II as much as I did with Frozen. Let it Go is my favorite song from Frozen. Into the Unknown and Show Yourself are my favorite songs from Frozen II. Idina Menzel has done it again! She nailed it as the Snow Queen/Fifth Spirit herself, singing and speaking voices alike. AURORA nailed it as the Voice. Disney’s animation squad nailed the visual effects for this movie. The Foley guys nailed the sound effects for this movie. Buying this for sure! Thank you so much for bringing me more Frozen stuff for me to enjoy. The message that’s shown in the movie is powerful like it’s supposed to be.❄️ ❄️Be yourself, embrace who you are and unleash your inner Snow Queen!❄️ ❄️Thanks for reading and have a blessed day!❄️ ~IcePrincess66

Super romantic & sweet songs!!! Loved the movie and songs.Keep it going!! How did you manage to make such great melodies?! These songs are better than let it go, the one in frozen.

Okay, so, Frozen 2 was really good. A lot of people will say it was better than the first one, but I don’t think the two should even be compared because they were two very different kinds of movies. However, I much prefer the music from this movie. I don’t have a specific reason why. It’s literally just my opinion. Also, to the people leaving terrible reviews because they don’t like Frozen, GET A LIFE.

My child fell in love with them!

LyndieLou5 - I Love Frozen 2 better than the first

I just love it better than the first movie

It’s not that I don’t like the song it’s just I don’t really like that music.👍But good

I loved the movie, and I love to listen to the songs again. This album is great.

I love the movie but I need to rest of the album and idk what songs to get next. Should I get something never change or the next right thing

Why do I love Frozen II? Yes, its story is awesome, but only music can give it such power! Very big thanks to Robert and Kristen-Anderson Lopez for putting so much time and effort into the score for the film! Take a vacation; you’ve earned it!

hikre dike do - Into the unknown

The songs are all great! Frozen was a great movie and soundtrack. I can’t wait to see the slightly darker Frozen 2! (Yes I bought the album before seeing the movie) I’m also currently reading a Frozen novel. So far my favorite song is Into The Unknown by Idina Menzel!

👑 Aly - Into the unknown by Brendon Urie is the best version ever.

The music and songs are phenomenal!!!

I loved the movie and it’s songs!

It is so garbage

wendyjkitelle - This is amazing in to the unknown

Outstanding but why isn’t this advertised more on iTunes!! The standard album version isn’t nearly as good! This collection has some wonderful outtakes, truly wonderful songs that never made it into the film, plus instrumentals and score!! This should be the one Disney advertises and they should have released the deluxe version physically in the U.K!! Maybe they will and if they do, it’ll be the only physical version I’ll buy!!

More sonically complex and mature than the first movie. Beautiful vocals and beautiful songs. All Is Found, Show Yourself and The Next Right Thing are the stand-outs.

The songs are so good. Even better than the songs from the 1st Frozen movie. Josh Gad is great at playing Olaf with the song when i am older. Idina Menzel sings her heart out with Into the Unknown (with Norwegian singer AURORA as the voice) and Show Yourself (which makes me cry everytime I hear that song), Jonathan Groff goes all 80s-inspirational with Lost in the Woods as Kristoff and the Svens surrounding him, and Kristen Bell stands up for whether you thought something has made you upset and tries to make herself happy again in The Next Right Thing. This is the soundtrack I would definitely have on repeat 24/7. And this is where either one or two of Idina's songs should be nominated for best song in the 2020 Oscars. And I can't wait to see the movie itself!!! Seb Sandford

The songs on this album are incredible! Show Yourself and The Next Right Thing are my particular favourites... but thank goodness Jonathan Groff got to use his heavenly voice in Lost in The Woods in this one. Was such a waste in the 1st movie.

INTO THE UNKNOOWWWWWWNNNNN OOOHHHHHHHHHH 0.0 sorry it’s just really stuck in my head. I’m even writing it! Great movie and soundtrack ^_^

No Aurora version of into the unknown, very unimpressed.

Great movie and has great music to go with it. Frozen 2 is the best of all time and the songs take it further, especially “Show Yourself” and “Lost in the Woods”. “Into the Unknown” was overplayed and overposted on YouTube. “Show Yourself” was the best song out of the movie. Elsa...lets just say, finds something and is happy about it. “Lost in the Woods” shows how Kristoff loves Anna, but shows that he thinks he is having to chase her. 😁 I don’t think Frozen III could get better.

When i had my movie theatre job, i used to despise hearing these songs, now look at me... willingly listening to them😭 .

What do you think Frozen 2 (Original Motion Picture Soundtrack) [Deluxe Edition] album? Can you share your thoughts and listen experiences with other peoples? 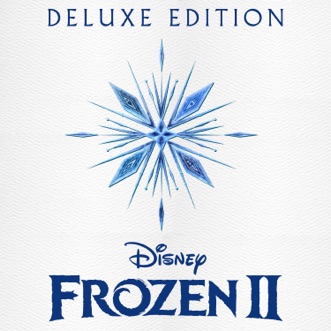